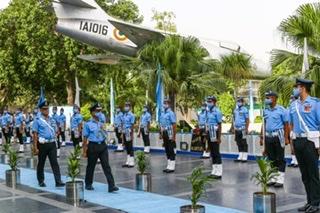 New Delhi: Air Marshal BR Krishna took over as Air Officer Commanding-in-Chief (AOC-in-C) of Western Air Command on Thursday. The Air Marshal was commissioned in the IAF in December 1983 as a Fighter Pilot.

In a distinguished career spanning nearly 38 years, the Air Officer, being a Qualified Flying Instructor and an Experimental Test Pilot, has flown a wide variety of fighters, transports and helicopters in the inventory of IAF.

He has a flying experience of nearly 5000 hours, including operational, instructional and test flying. During his illustrious career in the IAF, the Air Officer has held numerous important command and staff appointments.

As an Air Vice Marshal, he held the coveted appointments of Assistant Chief of Air Staff (Projects) and ACAS (Plans) at Air HQ.

As an Air Marshal, he served as Senior Air Staff Officer, HQ SWAC and prior to taking over as the AOC-in-C, he held the appointment of Director General Air (Operations) at Air Headquarters.