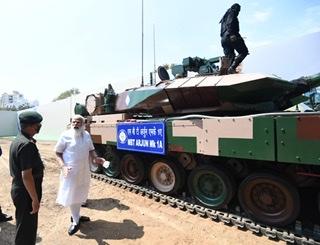 Chennai-based DRDO’s lab Combat Vehicles Research and Development Establishment (CVRDE) has designed and developed it while it is being manufactured by Avadhi-based Ordnance Factory Board.

The tank weighs 68 tonnes and features a 120mm main gun with 71 other upgrades. As per the report, a total of 118 Arjun tanks will be inducted into the army. The Ministry of Defence has approved the induction of 118 Arjun tanks worth Rs 8,400 crore.

These  tanks would form two regiments in the Armoured Corps and add to the first batch of 124 Arjun tanks which have already been deployed on the western deserts along the Pakistan front.

“MBT Arjun with its first round hit probability has one of the most accurate tank gun in the world. This majestic tank has indigenous Kanchan Armour strapped with reactive armour panels,” a DRDO official said. In close association with DGQA, eight DRDO laboratories, many DPSUs, more than 200 MSMEs, large scale industries and over 15 academic Institutions participated in the MBT Arjun programme.

After using in different conditions, Indian Army had recommended a number of improvements to MBT Arjun Mk 1, which enhanced the mobility and fire power of MBT Arjun Mk 1A. With these changes, this upgraded version has successfully undergone extensive trials by the Indian Army.

The precise target tracking of the tank ensures accurate engagement during day and night in both static and dynamic conditions. The indent for 118 tanks will be placed shortly on Heavy Vehicle Factory (HVF), AVADI.