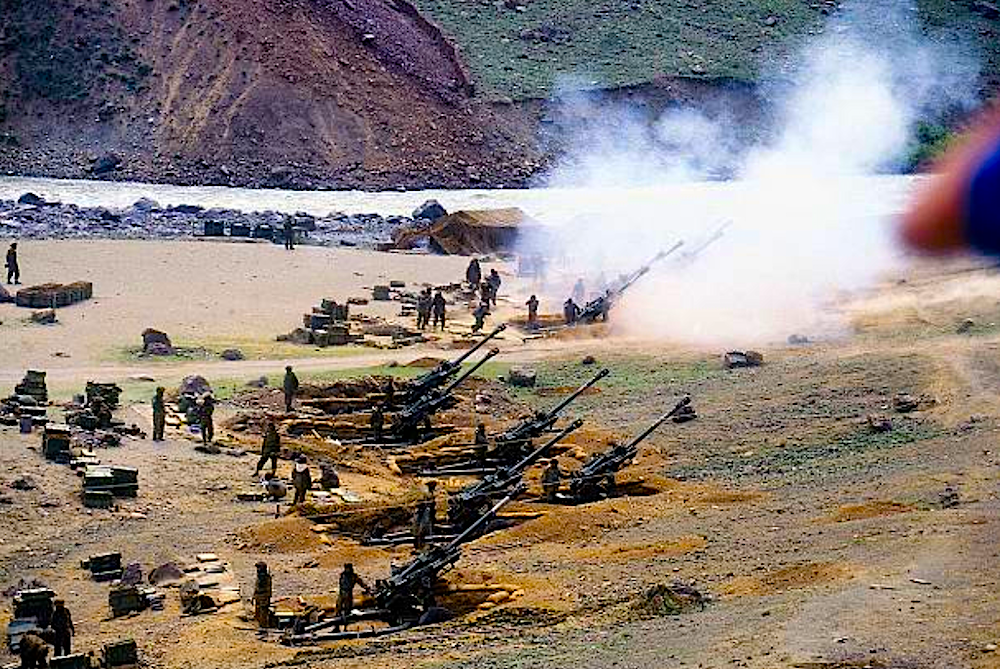 “If you don’t have enough artillery, quit.”

Artillery forms the backbone of any infantry charge. Without the backing of artillery fire, the infantry becomes vulnerable to counterattack. If you have 100 men advancing on your position from a distance, you can probably stop them with a battery of 3–4 guns and a crew of about 20, which will keep you well out of the range of their weapons.

Artillery also gives you the ability to hit not only men, but also equipment, fortifications and facilities, which would otherwise be very hard for ground forces to reach and attack. Once the artillery devastates the enemy ground position, the infantry can charge to gain the ground with minimal threat and casualties.

Artillery in India has been around for slightly less than 500 years. It steadily evolved as the mainstay in the army.

The first real use of artillery in India was seen in the first battle of Panipat on April 21, 1526. In the battle, Ibrahim Lodhi’s huge infantry and cavalry of an estimated 50 thousand soldiers and about one thousand armoured elephants faced a small army of Babur of Samarkand. Various estimates put his army from twelve thousand to twenty five thousand with no armoured elephants. But he had one decisive advantage – his field guns. With only 20 field guns manned by Persian gunners, Babur decisively defeated an army more than double the size of his army. It was the first time India saw the importance of the field artillery – a weapon that would change the face of war in the subcontinent.

The Mughals knew the strategic importance of the field artillery. Therefore, they made it a point to never let the natives be recruited into the artillery regiments of their army. Initially, Mughal artillery was manned by the Turks and Persians, who were later replaced by Europeans, half-castes and Christian converts. Later, the Portuguese, the Dutch, French and the British were recruited both as gunners and as advisers in gun manufacturing. The British quite like the Mughals, followed the same policy.

Other artilleries of 17th to 19th century

Marathas relied mostly on outside sources for their artillery and never had a foundry of their own. They mostly purchased guns from European arms traders and whatever they could capture from the rulers they invaded. So Maratha artillery wasn’t as strong as many of their contemporaries.

Tipu Sultan was one Indian ruler who boasted of a strong infantry backed by an equally strong artillery. He had modelled his army on the lines of the European armies. Tipu Sultan’s artillery took an active part in all the battles that he fought against the Marathas and the British.

As Tipu progressed from battle to battle, he started to rely more and more on his artillery arm. A general idea of the organization and strength of Tipu Sultan’s army can be obtained from a hukumnama (ordinance) dated March 25, 1793, addressed to the meer meeran (military department) and some rough memoranda connected with the military establishment, written for the most part in the Sultan’s own hand. Khan Mobibbul Hussain, Tipu Sultan’s biographer writes that the Mysore guns “being larger than those of the English, and having a much longer range, had a great impact. This gave both Hyder Ali and Tipu Sultan considerable advantage over the English cannonade.

The East India Company raised the first regular company of artillery in 1748, with a small percentage of Indian gunners called Gun Lashkars, Tindals and Serangs. A few Indian mountain artillery batteries, officered by the British, were raised in the 19th century and formed part of the Royal Artillery. The Royal Indian Artillery (RIA) of the British Indian Army, was raised on September 28, 1827, as a part of the Bombay Army, the army of the Bombay Presidency. It was later renamed as 5 Bombay Mountain Battery, and participated in the First Anglo-Afghan War (1839–1842).

In the Sepoy Mutiny of 1857 many of the Indian soldiers of the Bengal Artillery were involved. The three battalions of the foot artillery then in existence were all disbanded in 1862. Subsequently all Indian artillery units were disbanded except for four mountain artillery batteries of the Bombay Army and four field batteries of the Hyderabad Contingent. Major Richard Keatinge of Bombay Artillery was awarded the Victoria Cross in 1858 for his service during the mutiny.

This regiment played a big role in the Second World War. During the war, the campaigns in Malaya, Burma, East and North Africa, the Middle East and Italy made the Indian Artillery battle-hardened. Once the British government recognized the capabilities of the Indian Artillery, their role which initially was limited, grew more substantial in the war. The war experience, raising of new units and reorganization during and after the World War and partition, became the foundation on which the modern “Regiment of Artillery” developed and constantly became the backbone of subsequent military expeditions.

The list of its campaigns is long. I will try to give a short summary of a couple of its battles. The Indian Artillery’s participation in the Second World War began in East Africa. As a precautionary measure against the possibility of Italy joining the war on the side of Germany, 22 Mountain Battery was sent to Kenya on September 1, 1939 – just two days before Britain declared war on Germany. This unit thus became the first Indian Artillery unit to participate in the Second World War. When Italy did join the war, this mountain battery was attached to the East African Brigade, which faced the Italians in southeast Africa and subsequently drove them out of there.

There should also be a mention of the “Battle at Point 171”, south of Bir Hacheim in Libya. Here the 2 Indian Field Regiment and 1 Anti-Tank Regiment borne the full brunt of Nazi Germany’s Generalfeldmarschall Johannes Erwin Eugen Rommel’s famed Panzer divisions.

Although overrun, the Indian force stalled the attack long enough with just 25 pounder guns and without any tank support or any mine defences. The resistance surprised and impressed Rommel so much so that he later stated in the Rommel Papers: “Our plan to overrun the British forces behind the Gazala line had misfired.”

Even Winston Churchill went on the record on the floor of British House of Commons and had said: “The full brunt of the enemy’s actual  advance to the east of Bir Hacheim was taken by 3 Indian Motor Brigade Group (2 Indian Field Regiment and 1 Anti-Tank Regiment), but not until after it had inflicted heavy casualties on the enemy and seriously impeded the advance.” Sir Winston also rose from his seat to pay tribute to the Indian Artillery in Bir Hacheim under 3 Indian Motor Brigade Group for the valour that stalled Rommel's forces and may even have turned the battle in the favour of the British.

There are several other battles where the Indian Artillery showed its might, whether against the Germans, Italians or Japanese. Telling the story of every battle in this small piece is not possible. However, these couple of stories would give the reader enough to gauge the contribution of Indian Field Artillery in the Second World War. So impressed was the British government that it conferred the title of “Royal” to the Regiment of Artillery, renaming it to “Royal Indian Artillery” after the war. Field Marshal Sir WJ Slim wrote a personal note to thank all the gunners of Indian Artillery.

Artillery was and is the mainstay in Indian Army. Whatever the battle, be it 1962 India-China border war or the wars India and Pakistan fought, the artillery has never disappointed. We should keep upgrading our arsenal and remember the contributions of our gunners.