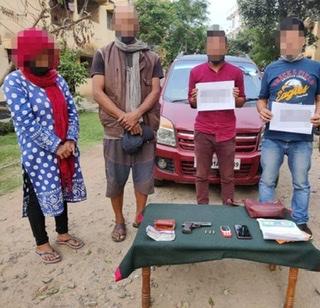 New Delhi: In a joint operations with police, the security forces apprehended two active cadres of NSCN (IM) and rescued two civilians (a married couple) from Dimapur Government College, in Nagaland on Saturday.

Based on a specific input, the security forces launched a joint operation with State Police apprehending two active cadres of NSCN (IM) and rescued the couple, who were earlier  abducted from Nagaland Gate at gun point, on the orders of a Kilonser of NSCN (IM).

During the operation, the forces also recovered one point 32 Pistol, three rounds of point 32 ammunition, two mobile phones and other incriminating documents.

It is evident from the outcome of recent operations that the cadres of  the faction are resorting to coercion based extortion and abducting civilians for non payment of their extortion demands.

The apprehended cadres alongwith recovered items have been handed over to West Police Station, Dimapur district for further investigation.