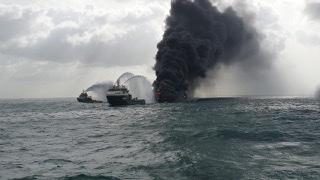 New Delhi: In coordination with Sri Lankan authorities, Indian Coast Guard (ICG) has been tirelessly engaged in fighting a major fire onboard the Chemical laden container vessel MV X-Press Pearl anchored off Colombo since May 25.

The strenuous joint efforts of ICG ships and Sri Lanka deployed tugs resulted in extinguishing the fire to enable the salvors to board the derelict on June 1 for necessary assessment.

On June 2, water ingress started from the right shipside of the vessel, leading to observable change in draught and trim. Attempts to tow the vessel away from coast by Tug in vicinity were not fruitful as the derelict sank with its aft portion touching the sea bed. The vessel presently is partially submerged and listed to one side with its superstructure and forward portion visible.

Diving operations are being undertaken by Sri Lanka navy divers to carry out underwater hull inspection of the derelict. Technical deliberations to salvage the vessel is in progress by the salvors.

Among other chemicals, the IMDG cargo consisted of highly inflammable Nitric Acid, Methanol, Methyl Acetate, Sodium Hydroxide and Polystyrene beads. The fire which initially started onboard on May 20 while at anchorage, was brought under control by the efforts of Sri Lankan authorities and Salvage team.

However, on the early morning of May 25, flames erupted in the ship due to containers fallen onboard in rough weather and ensuing fire due to highly reactive chemicals leaking from containers. All the 13 crew and the 12 salvors working onboard were safely evacuated by the Sri Lankan authorities as the fire quickly spread engulfing the entire ship.

The sinking of the vessel with chemicals and sizable quantity of fuel has led to environmental concerns. Indian Coast Guard Ships including the specialised Pollution Response vessel Samudra Prahari and Offshore patrol vessel Vajra are maintaining in vicinity of the derelict in PR configuration along with Sri Lankan ships and standby to respond to the developing situation. Presently, no oil spill has been reported by the authorities.

The coordinated joint operation between India and Sri Lanka undertaken to respond to potential environmental danger has been christened as Sagar Aaraksha-II.

Indian Coast Guard is closely monitoring the situation and coordinating with Sri Lankan Navy, Coast Guard, MEPA and other authorities to address any impending environmental damage due to the sinking of the vessel close to the coast.

Additional ICG formations at Kochi, Chennai and Tuticorin remain standby for immediate assistance if any, towards Pollution Response.

ICG being an active member of South Asia Co-operative Environment Programme (SACEP) remains committed to its responsibilities of safeguarding of the ocean environment in the region.