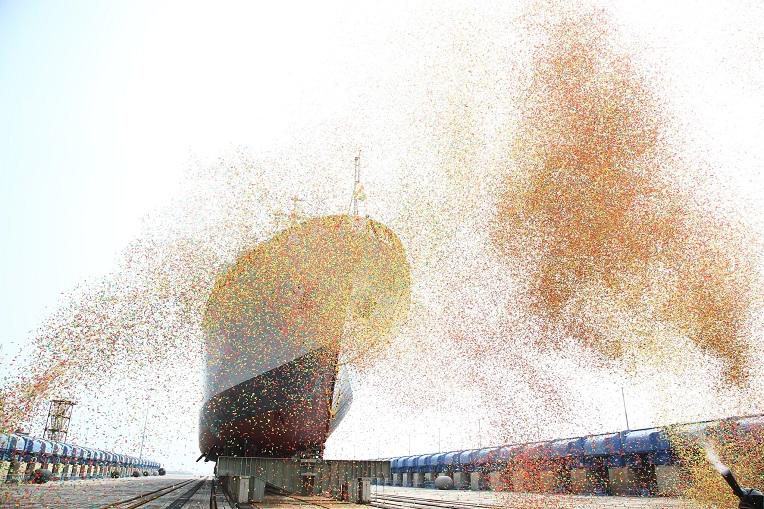 Prior to launch, the vessel was named “INS Ikshak '' and once delivered, this Ship would play a vital role in charting the seas and safeguarding India’s maritime assets as a part of the Indian Navy.

The latest Survey Vessels (Large) series built by GRSE are far more advanced than the earlier survey ships in the Indian Navy’s fleet.

These modern, indigenously developed 110-metre long and 16-metres wide vessels have a displacement of nearly 3,400 tonnes and can attain a top speed of 18 knots with an endurance of 6,500 nautical miles.

Vice Admiral MA Hampiholi, in his address, congratulated GRSE on this achievement and commended the shipyard for achieving this launch which epitomizes the stakeholders' positive spirit and enthusiasm.

He said “GRSE has an excellent legacy of ship building for over six decades and in over six decades they have, I am given to understand, delivered close to 800 ships of various hues- big and small of which over 100 of them have been delivered to the Indian Navy, Indian Coast Guard, the friendly foreign countries like Mauritius, Seychelles and the like.”

As far as the Indian Navy is concerned, GRSE has delivered ships ranging from Fast Attack Crafts, Landing Craft Utilities & Survey Vessels which would be delivered shortly. Corvettes, Frigates and indeed a Fleet Tanker too. It only speaks volumes of their diversification and their abilities, having established and niche capabilities of shipbuilding in the country.”

Am sanguine that GRSE will only scale to much greater heights and keep up with the vision of being a world leader in building state-of-the-art ships for the country and perhaps the world over times to come. It is extremely heartening to see this collaboration approach by GRSE which speaks volumes of PPP between two entities harnessing the best practices, experiences, knowledge and expertise between the two and is indeed the way to go.”

In his speech during the ceremony, Cmde PR Hari IN (Retd), CMD, GRSE said “As on date GRSE is constructing 15 Warships for the Indian Navy including the Shallow Water Craft Project, the P17 A Project and the Survey Vessel (Large) Project. Considering the growth aspirations of the Indian Navy and orders that are likely to be on the anvil in the coming years, we are very confident that our numbers of 70 deliveries as on date for the Indian Navy, shall touch the Century Mark during the current decade itself.”

“This unique Public Private Partnership Model has stabilized and in GRSEs appreciation, this PPP model is something the nation needs today, where the resident expertise and experience of the Public Sector Shipyards has been married to the operation flexibility of the Private Shipyards, resulting in what the nation needs, Ships on time and with Quality.”