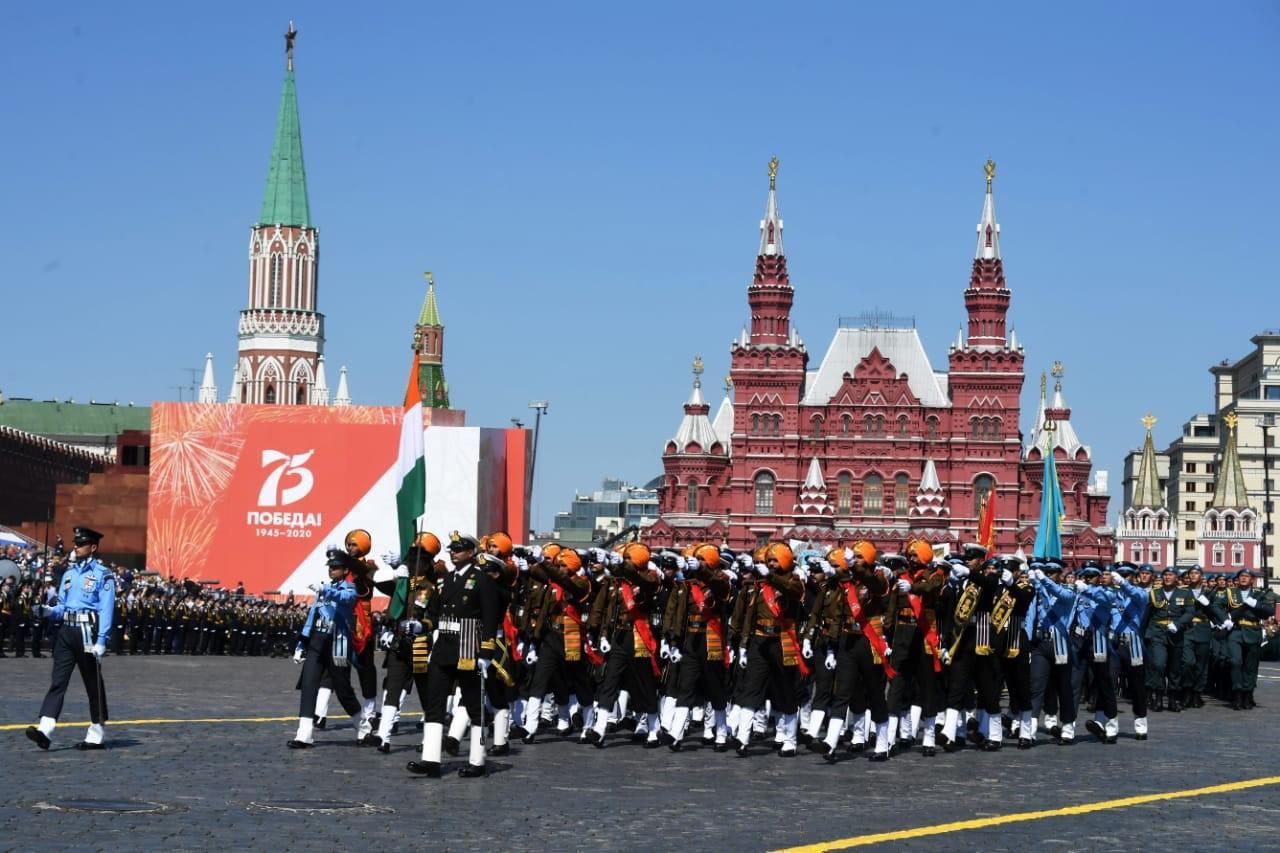 Moscow: India’s triservice contingent on Wednesday participated in the Victory Day parade at Red Square in Moscow as a part of the 75th Anniversary of the World War II.

Russia has celebrated the 75th anniversary of victory of the then Soviet People in the great Patriotic War of 1941-1945.

The triservice contingent of the Indian armed forces comprised of 75 all ranks and marched along with contingents of Russian Armed Forces and 17 other countries, a defence ministry official said.

The defence minister, Rajnath Singh, and the defence secretary, Ajay Kumar, were among others also attended the event.

Singh is on a three-day visit to Russia.

In a tweet he said, "Impressive turnout of the triservice contingent of the Indian armed forces at the Victory Day parade in Moscow is indeed an extremely proud and happy moment for me."

Impressive turnout of the Tri-Service contingent of the Indian Armed Forces at the Victory Day Parade in Moscow is indeed an extremely proud and happy moment for me. pic.twitter.com/csEKNGKFLU

The British Indian armed forces during World War II were one of the largest Allied Forces contingents which took part in the North and East African Campaign, Western Desert Campaign and the European Theatre against the Axis powers. These campaign witnessed sacrifice by over 87 thousand Indian servicemen beside 34,354 being wounded.

The Indian military not only fought on all fronts, but also ensured delivery of goods along the Southern, Trans-Iranian Lend-Lease route, along which weapons, ammunitions, spare parts for equipment and food went to the Soviet Union, Iran and Iraq.

The valour of the Indian soldiers was recognised with the award of over four thousand decorations, which also included award of 18 Victoria and George Cross.

In addition the then Soviet Union appreciated the valour of the Indian Armed forces and by the decree of May 23, 1944, the Presidium of the Supreme Soviet of the USSR signed by Mikhail Kalinin and Alexander Gorkin awarded the prestigious Orders of the Red Star to Subedar Narayan Rao Nikkam and Havildar Gajendra singh Chand of Royal Indian Army Service Corps.

On Tuesday, the defence minister called his visit to Moscow a sign of India-Russia special friendship.

"My visit to Moscow is the first foreign visit from India of an official delegation during the COVID-19 pandemic. This is a sign of our special friendship," said Singh.

The minister also had a meeting with Russia’s deputy prime minister, Yury Borisov, where they reviewed the defence cooperation and discussed ways to expand it.

"India & Russia enjoy special and privileged strategic partnership and defence relationship is one of its important pillars," wrote Singh on Twitter.