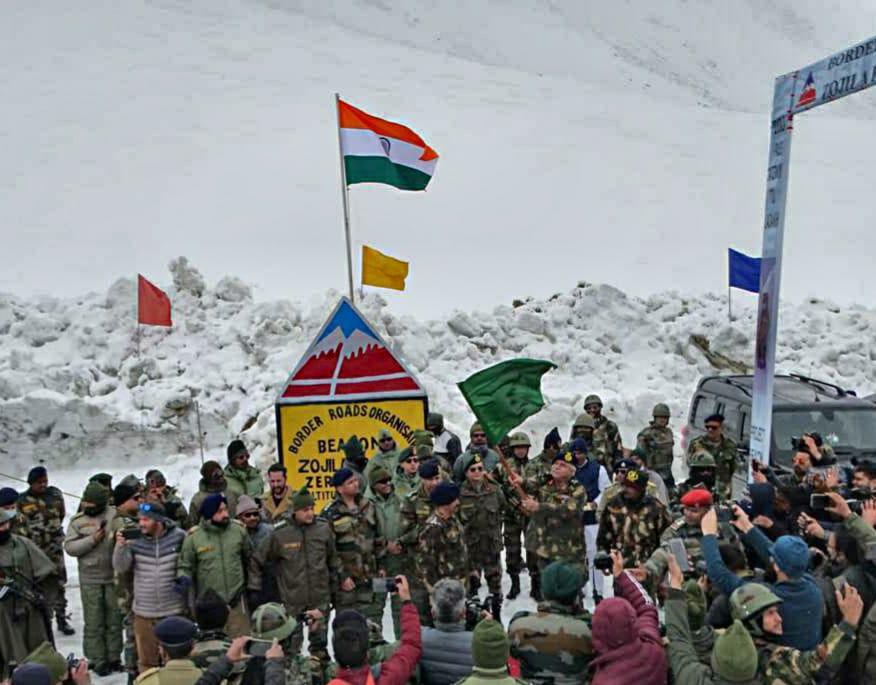 Zojila: Border Roads Organisation (BRO) opened the gateway between Union Territories of Ladakh and Jammu & Kashmir - the Zoji La Pass - for traffic on Srinagar-Kargil-Leh road at 11,650 feet on March 19, setting up an all-time record of the pass being opened after just 73 days of its closure this year.

This is the first time BRO has been able to achieve the feat, after it had kept the pass open till January 05, 2022 through relentless snow clearance operations amidst tough weather conditions.

Since February 15, 2022, the snow clearance operations were undertaken from both sides of the pass by Project Beacon and Vijayak, located in J&K and Ladakh respectively.

After sustained efforts, the connectivity across Zoji La Pass was initially established on March 04, 2022. Thereafter, efforts were made to improve the road conditions to create safe passage of vehicles.

First convoy of vehicles carrying essential fresh supplies moved across the Zoji La Pass and reached Kargil bringing much needed relief to the people of Ladakh. Usually, the Zoji La Pass used to remain closed for around 160-180 days during winters on account of heavy snowfall.

Various dignitaries from civil administration and the Indian Army, including Director General Border Roads (DGBR) Lt Gen Rajeev Chaudhry, were present during the re-opening of the pass.

Lauding the efforts of Project Beacon and Vijayak, the DGBR said, early opening of Zoji La Pass will not only bolster the defence preparedness of the country, but will also facilitate the movement of essential commodities to the people of Ladakh.

He added that the opening of the pass will assist BRO to stock the material required for construction of important infrastructure projects in Ladakh.

He reiterated BRO’s commitment to be in the forefront in Nation Building.