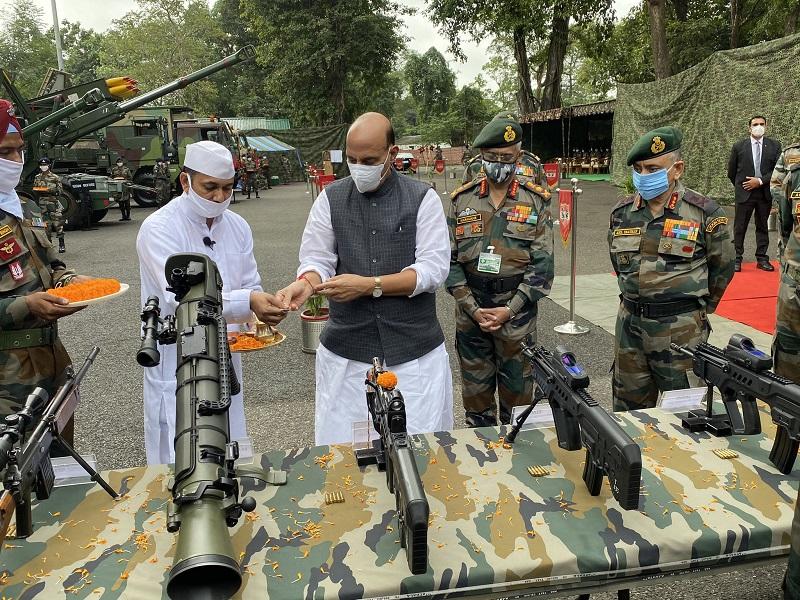 Darjeeling: On the occasion of Vijay Dashmi, Defence minister Rajnath Singh on Sunday performed Shastra Puja - worshipping of weapons with the Indian Army troops at Sukna war memorial in Darjeeling.

The minister had to cancel his Nathu-la visit due to bad weather.

‘‘A very happy Vijay Dashmi to all the countrymen. Today, on this occasion I will be visiting Nathu-la and interacting with troops. I will also attend the shastra puja ceremony,’’ Mr Singh said in a tweet.

He is on a two-day visit to West Bengal and Sikkim, starting Saturday.

Shastra Puja is a ritual performed by the Hindus annually around the time of Dussehra.

Last year, the minister had performed the puja in France while formally receiving the first Rafale fighter jet.

He has visited in the eastern sector to boost the morale of Indian soldiers deployed against the China’s People’s Liberation Army (PLA) at the border.

On Saturday, he reviewed the security situation and preparedness of Sukna-based Trishakti Corps and said that the country’s boundaries are secure due to its soldiers.

“India always wants good relations with all its neighbouring countries, we have always made an effort for the same. But our jawans have had to sacrifice their lives from time to time to protect our borders, integrity and universality,” he said.

“This time in Galwan, our 20 jawans of Bihar Regiment sacrificed themselves to protect our motherland...The nation and its boundaries are secure due to you,” he added.

The troops of two Himalayan giants have been engaged in a border standoff since early May.

While the Ladakh sector has been the focus of the current round of border tensions with China, a tense confrontation between Indian and Chinese troops took place in north Sikkim in early May, just days after a brawl between rival troops on the northern bank of Pangong Tso.

The border standoff between two countries has entered into its sixth month. It has taken the relationship to a new low, with troops even firing warning shots at friction points in August-September.

This was the first instance of shots being fired along the LAC since October 1975.