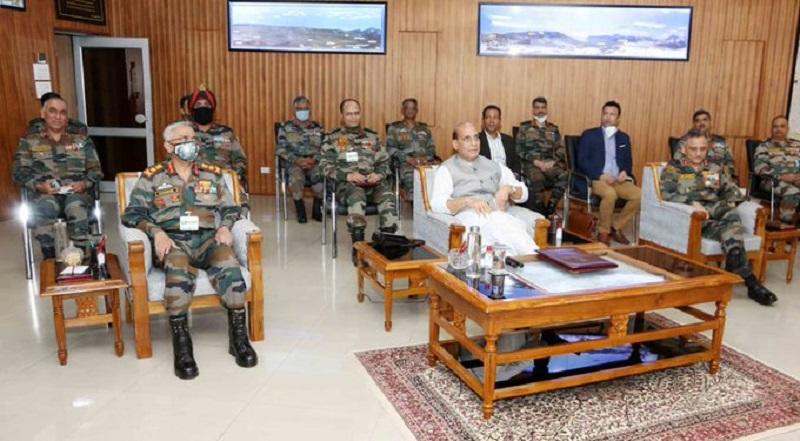 New Delhi: Defence minister Rajnath Singh on Saturday reviewed the security situation and preparedness in the eastern sector at 33 Corps headquarters in Sukna of west Bengal.

Mr Singh, who is on a 2-day visit to West Bengal and Sikkim, will visit to forward posts and interact with the troops deployed against the China’s People’s Liberation Army (PLA).

In a tweet, the defence minister office said, ‘‘Raksha Mantri reviewed the situation and preparedness in the Eastern Sector at the Headquarters of 33 Corps in Sukna.’’

Raksha Mantri reviewed the situation and preparedness in the Eastern Sector at the Headquarters of 33 Corps in Sukna. pic.twitter.com/CWLSanxGtB

Before departing for Darjeeling earlier in the day, in a tweet Mr Singh said he will also inaugurate a road made by Border Road Organisation (BRO) in Sikkim.

‘‘Heading to Darjeeling on a two-day visit to West Bengal and Sikkim. I shall visit the forward areas and also interact with the troops. A road constructed by the Border Roads Organisation in Sikkim will also be inaugurated during the visit,’’ Mr Singh said in a tweet.

This comes even as India and China are engaged in a standoff since April-May this year from Ladakh to Arunachal Pradesh in Northeast. The visit will be a morale booster for the troops deployed along the LAC amid the border tension between India and China.

India has deployed close to 60,000 soldiers to counter the Chinese Army which first moved troops to enter Indian territory in Pangong Tso and other adjoining locations.

He will celebrate Dussehra with the troops along the Line of Actual Control (LAC) in Sikkim. The festival Dussehra signifies the victory of good over evil.

He will also perform ‘‘Shastra Pooja’’ with the troops at Nathu La on October 25.

The minister will also be visiting ‘‘Thakur Ji’s’’ temple in one of the forward locations during his visit.