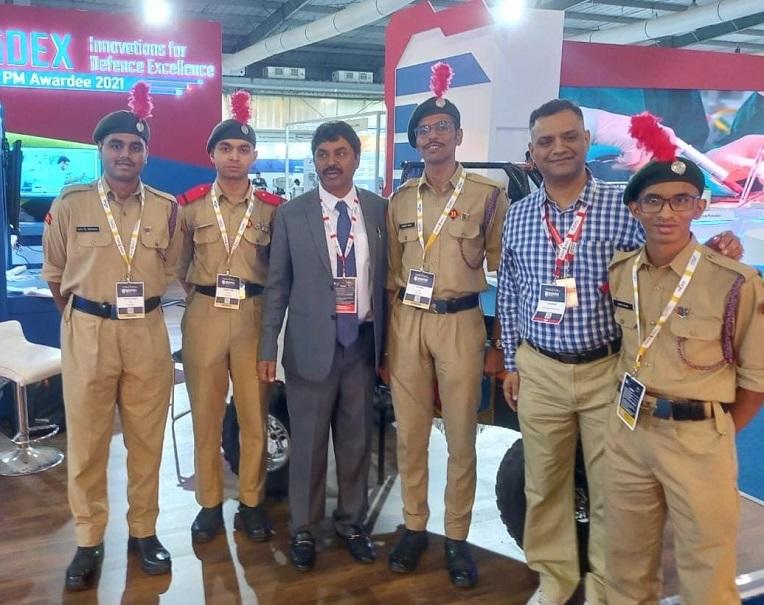 Gandhinagar: In a first, National Cadet Corps (NCC) cadets of Bihar & Jharkhand Directorate participated as exhibitors during the 12th DefExpo in Gandhinagar, Gujarat and displayed three advanced technology prototypes, showcasing the might of the largest uniformed youth organisation in the world.

The three prototypes were:

UAV: Designed and developed by the cadets, it is a versatile platform which can be used for tactical missions ranging from counter insurgency/counter terrorist operations for reconnaissance using remotely controlled cameras.

It can also be used as a destroyer using GPS. The UAV is a highly economical version and can be easily made for training purposes as well for defence.

Currently, the overall weight of the UAV is 1kg and it can carry a payload of around 0.7 Kgs.

“The current version of the UAV can be well utilised for training army and air force personnel. We will be shortly coming up with an upgraded version,” said UO Somya Garg, NCC, BIT Mesra and a 4th Year Mechanical Engg. Student.

All-Terrain Vehicle: Developed and designed for all terrain mobility, it is most suitable for last mile connectivity in extreme rugged terrain to deliver ammunition and supplies and can also be used for patrolling and search and destroy operations.

It has features like all wheel independent suspension and can withstand a free fall of six feet. The ATV is capable of towing vehicles upto 1500 kg.

“Being a part of the ATV team, I feel proud and my exposure to DefExpo 2022 will help me to further upgrade the ATV based on the requirement,”, said Cdt Aditya Kumar, NCC, BIT Mesra and a 2nd Year Mechanical Engg. Student.

“I received a lot of compliments from senior official of Armed Forces and MoD for developing the hand gesture bot. I will certainly upgrade the current prototype for meeting armed forces requirement and commercialise this product,”, said Cdt. Jainam Nahar, NCC, BIT Mesra and a 2nd Year Electronics and Communication Engg. Student.

All these prototypes were displayed to senior dignitaries from Armed Forces and MoD.

They showed keen interest about the displayed prototypes and lauded the efforts of Bihar and Jharkhand Directorate NCC for showcasing the talent of cadets at such an event.

“Products developed at BIT Mesra, Ranchi were displayed in the DefExpo 2022. I congratulate and wish the cadets all the very best,” said Shri Arjun Munda, Union Minister of Tribal Affairs.

“I feel proud to see that the NCC cadets have come up with such a useful innovative product and they have displayed in the DefExpo 2022. I am sure that their innovation will not only address the defence requirements but also will be useful for the social needs,” said Shri Sudhir K Mishra, Ex-CMD, Brahmos.

“BIT Mersa is delighted that NCC provided such a great platform to the student’s innovations. It will inspire the cadets to aim for lofty goals and develop interest and confidence in many others,” said Dr Priyank Kumar, AICTE Idea Lab, BIT Mersa.

“I admire the work done by the NCC cadets. Keep up the good work,” said Chief of Naval Staff Admiral R Hari Kumar.