India remain prepared to deal with all contingencies: Rajnath on India-China border row 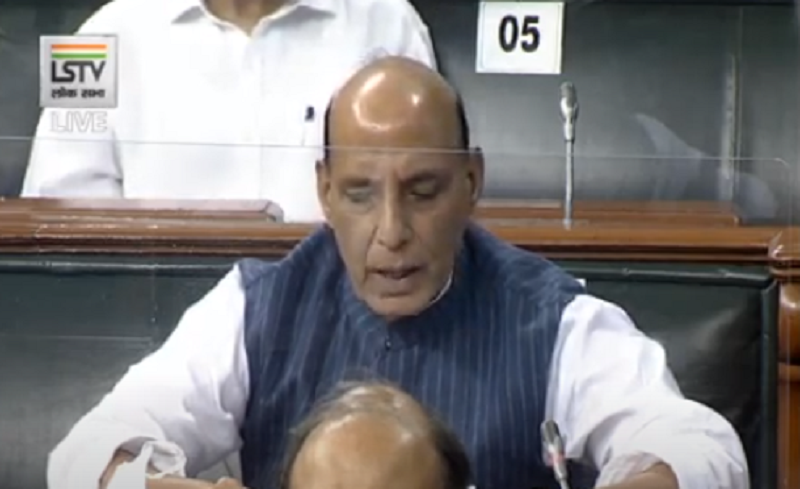 New Delhi: Reiterating the commitment of the government to protect India's sovereignty and territorial integrity, Defence minister Rajnath Singh on Tuesday asserted that India will not accept any attempt to change the status quo at Line of Actual Control (LAC) which acts as border with China and remain prepared to deal with all contingencies.

Making a statement in the Lok Sabha on “Development on our border in Ladakh”, Mr Singh said that in a meeting with his Chinese counterpart in Moscow earlier this month he had clearly stated that “while our troops had always taken a responsible approach towards border management, but at the same time there should be no doubt about our determination to protect India's sovereignty and territorial integrity.”

Recalling the June 15 violent face off with Chinese troops, he said the incident in Galwan valley saw supreme sacrifices being made by our brave soldiers who also inflicted heavy losses on the Chinese. There should be no doubt on India's determination in keeping the border areas safe, he said that India wanted a resolution through peaceful means and dialogue.

“We want peaceful resolution to the standoff. There are three key principles -- to respect the LAC, not change the status quo and all agreements and understandings should be respected,” he said.

Sharing details about what happened in the Galwan valley on June 15, the minister said that since April, “we had noticed a buildup of troops and armaments by the Chinese side in the border areas adjacent to Eastern Ladakh. In early May, the Chinese side had taken action to hinder the normal, traditional patrolling pattern of our troops in the Galwan Valley area, which resulted in a face-off.”

Even as this situation was being addressed by the Ground Commanders as per the provisions of our bilateral agreements and protocol, in mid-May the Chinese side made several attempts to transgress the LAC in other parts of the Western Sector. This included Kongka La, Gogra and North Bank of Pangong Lake. These attempts were detected early and consequently responded to appropriately by our armed forces.

Appreciating the role of Indian armed forces, he said, “The conduct of our armed forces throughout these incidents shows that while they maintained  “Sayyam” in the face of provocative actions, they also equally displayed “Shaurya” when required to protect the territorial integrity of India.”

He also said that no one should doubt “our determination to safeguard our borders, India believes that mutual respect and mutual sensitivity are the basis for peaceful relations with neighbours.”

In these discussions, “we have maintained the three key principles that, determine our approach: (i) both sides should strictly respect and observe the LAC; (ii) neither side should attempt to alter the status quo unilaterally; and (iii) all agreements and understandings between the two sides must be fully abided by in their entirety.”

The Chinese side, on its part, took the position that the situation should be handled in a responsible manner and ensure peace and tranquility as per bilateral agreements and protocol.

Even as these discussions were going on, the Chinese side again engaged in provocative military manoeuvers on the night of 29thand 30thAugust in an attempt to change the status quo in the South Bank area of Pangong Lake.

But yet again, timely and firm actions by our armed forces along the LAC prevented such attempts from succeeding.

As of now, the Chinese side has mobilized a large number of troops and armaments along the LAC as well as in the depth areas.

There are several friction areas in Eastern Ladakh including Gogra, Kongka La and North and South Banks of the Pangong Lake.

In response to China’s actions, “our armed forces have also made appropriate counter deployments in these areas to ensure that India’s security interests are fully protected. The House should have full confidence that our armed forces will always rise to the challenge and do us all proud.”

This rapid deployment by our armed forces including ITBP has taken place in a challenging time of Covid-19. Their efforts need to be appreciated.

It has also been made possible by the high importance that the Government has placed for developing border infrastructure in the last few years.

“The House is aware that over the last many decades, China had undertaken significant infrastructure construction activity that enhanced their deployment capabilities in the border areas. However, in response, our Government too has stepped up the budget for border infrastructure development to about double the previous levels,” he said.

As a result, more roads and bridges have been completed in the border areas. This has not only provided much needed connectivity to the local population but has also provided better logistical support for our armed forces, enabling them to be more alert in the border areas and respond more effectively where required.

I would like to emphasize, that India remains committed to resolving the current issues in our border areas through peaceful dialogue and consultations.

It was in pursuit of this objective that I met my Chinese counterpart on 4th September in Moscow and had an in-depth discussion with him.

“I conveyed in clear terms our concerns related to the actions of the Chinese side, including amassing of large number of troops, their aggressive behavior and attempts to unilaterally alter the status quo that were in violation of the bilateral agreements.”

“I also made it clear that even as we wanted to peacefully resolve the issue and would like the Chinese side to work with us, there should also be no doubt about our determination to protect India’s sovereignty and territorial integrity.”

“My colleague, Shri Jai Shankar, the External Affairs Minister, has thereafter met the Chinese Foreign Minister in Moscow on 10th September. The two have reached an agreement that, if implemented sincerely and faithfully by the Chinese side, could lead to complete disengagement and restoration of peace and tranquility in the border areas.”

In the past too we have had situations of prolonged stand-offs in our border areas with China which have been resolved peacefully.

Even though the situation this year is very different both in terms of scale of troops involved and the number of friction points, "we do remain committed to the peaceful resolution of the current situation."

At the same time, the House can be assured that we remain prepared to deal with all contingencies.