Nation all set to celebrate 75 years of Independence 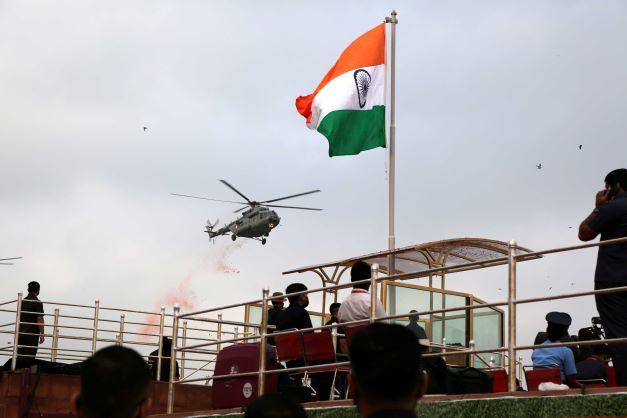 New Delhi: Tonight marks the seven and half decades of freedom for the people of India when on August 15, 1947 the country broke itself from the shackles of Colonial Rule.

The whole country has been gripped by patriotic fervour.

A series of events are being organised across the country by different ministries of Government of India, various state governments & Union Territories, the Armed Forces and general public alike to mark this momentous occasion.

Prime Minister Narendra Modi will lead the Nation in celebrating this historic 76th Independence Day from the ramparts of the Red Fort in New Delhi on August 15, 2022.

He will unfurl the National Flag and deliver the customary Address to the Nation.

Thereafter, the Prime Minister will inspect the Guard of Honour.

The Guard of Honour contingent for the Prime Minister will consist of one officer and 20 men each from the Army, Navy, Air Force and Delhi Police.

Indian Air Force is the coordinating service this year.

After inspecting the Guard of Honour, Modi will proceed to the ramparts of the Red Fort where he will be greeted by Raksha Mantri , Raksha Rajya Mantri Shri Ajay Bhatt, Chief of Army Staff General Manoj Pandey, Chief of Naval Staff Admiral R Hari Kumar and Chief of Air Staff Air Chief Marshal V R Chaudhari. The GoC Delhi area will conduct the Prime Minister to the dais on the ramparts to unfurl the National Flag.

Squadron Leader Sunita Yadav will assist the Prime Minister in unfurling the National Flag. It will be synchronised with the 21 Gun Salute fired by the valiant gunners of the elite 8711 Field Battery (Ceremonial). The ceremonial battery is commanded by Lt Col Vikas Kumar, SM and the Gun Position Officer will be Naib Subedar (AIG) Anoop Singh.

The National Flag Guard comprising five officers and 128 men from the Air Force, Army, Navy and Delhi Police will present Rashtriya Salute at the time of unfurling of the National Flag by the Prime Minister. Wing Commander TVR Singh from the Indian Air Force will be in command of this Inter-Services Guard and Police Guard.

As soon as the National Flag is unfurled by the Prime Minister, flower petals will be showered at the venue in Amrit Formation by two MI-17 1V Helicopters.

Following the two Mi-17 in line astern formation will be two Dhruv helicopters from 111 Helicopter Unit, ‘The Snow Tigers’. The formation is led by Wing Commander Abhijeet Kumar with Wing Commander KS Vishal in the second helicopter.

After the showering of flower petals, the Prime Minister will address the Nation.

At the conclusion of the speech of the Prime Minister, the cadets of National Cadet Corps (NCC) will sing the National Anthem. Seven hundred ninety-two boy and girl NCC cadets (Army, Navy and Air Force) from different schools across the country will take part in this festival of National Fervour.

These cadets will be seated at ‘Gyan Path’ in front of the Red Fort's ramparts in a geographical formation of the Map of India. They will adorn dresses of the regions they are representing, symbolising India’s cultural diversity. It is being done to carry forward the message of ‘Ek Bharat Shrestha Bharat’.

For the first time, a home-grown howitzer gun, Advanced Towed Artillery Gun System (ATAGS), developed under the Government’s ‘Make in India’ initiative, will fire during the ceremonial 21-gun salute.

The gun is completely indigenous, designed and developed by DRDO. The gun will stand as a testament to India’s growing capacity of developing arms and ammunition indigenously.

Lt Colonel Gagandeep Singh Sandhu is commanding the gun unit with the firing instructor Naib Subedar Gulab Wable. The gun has been especially customised, with certain technical specifications being tweaked for the ceremony.

In continuation to the initiative taken during the Republic Day 2022, the unsung heroes of the society, who are usually overlooked, have been invited as special guests for the Ceremony. These include anganwadi workers, street vendors, mudra scheme borrowers and mortuary workers.

As part of ‘Azadi ka Amrit Mahotsav’, Ministries of Defence and Culture came together in partnership with the National gallery of Modern Art to pay a unique tribute to the bravehearts of India’s struggle for freedom.

The monumental scrolls continue the ancient Indian tradition of narrative art and bring to life historic events that led India to break away the shackles of colonial rule.

This year, wall hanging of prominent Freedom Fighters and from different States and Union Territories are adorning the magnificent walls of Red Fort.

These hanging walls will also have different cultural, natural and religious heritage of that particular State and UT.

This gesture is a fitting tribute to these towering personalities for their unparalleled contributions, sometimes unsung, for the cause of Freedom.

Another beautiful addition to the celebration is one of India’s favourite pastime, the kite flying. Murals on kite flying are displayed at Meena Bazar depicting diverse colours, sizes and techniques of kites representing Unity in Diversity mantra of our Motherland.

For the first time as part of Independence Day celebrations, a special Youth Exchange Programme has been organised between August 09-17, 2022.

A total of 26 officers/supervisors and 127 cadets/youths from 14 countries – US, UK, Argentina, Brazil, Fiji, Indonesia, Kyrgyzstan, The Maldives, Mauritius, Mozambique, Nigeria, Seychelles, UAE & Uzbekistan – are already in India for the Independence Day celebrations. Apart from attending the main event at the Red Fort, the youth will be visiting places of cultural and historical importance in Delhi and Agra.

Durand Cup in Manipur symbolises the rise of a ‘New India’: Rajnath Singh

DefExpo 2022 to be held in Gujarat from October 18