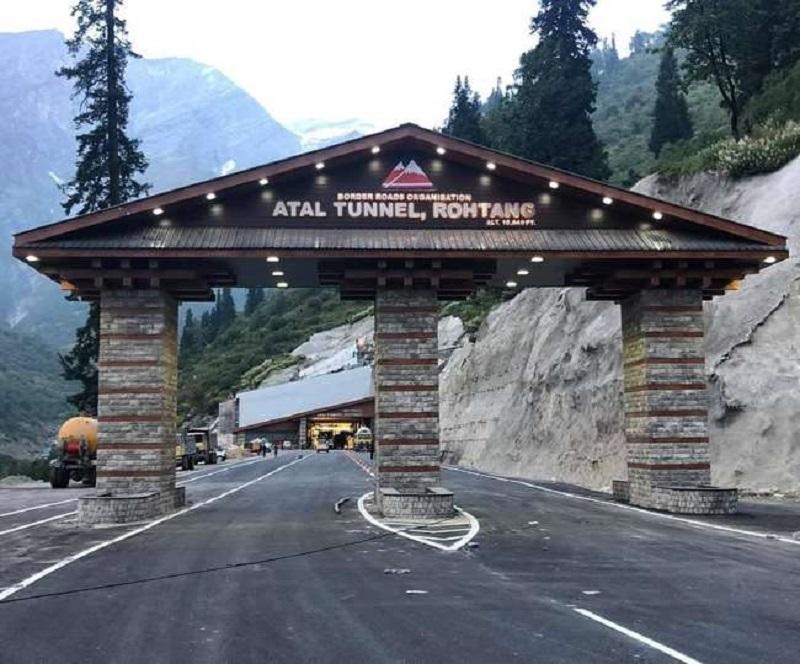 PM @narendramodi reached Sasse in Himachal Pradesh. He is on the way to inaugurate #AtalTunnel, a futuristic infrastructure project that will benefit several citizens. pic.twitter.com/RjsPWFSszz

The 9.02 Km long tunnel connects Manali to Lahaul-Spiti valley throughout the year. Earlier, the valley was cut off for about 6 months every year due to heavy snowfall.

The Tunnel is built with ultra-modern specifications in the Pir Panjal range of Himalayas at an altitude of 3000 Mtrs (10,000 Feet) from the Mean Sea Level (MSL).

Now, the travelling time will be reduced by 4-5 hours in reaching Leh from Manali while the distance by 46 kms.

It is a horseshoe-shaped, single tube double lane tunnel with a roadway of 8 Mtrs. It has an overhead clearance of 5.525 Mtrs. It is 10.5-meter wide and has a 3.6 x 2.25 Mtrs fireproof emergency egress tunnel built into the main tunnel itself.

Atal Tunnel has been designed for a traffic density of 3000 cars per day and 1500 trucks per day with a maximum speed of 80 km/hr.

The historic decision to construct a strategic tunnel below the Rohtang Pass was taken on June 03, 2000, when late Atal Bihari Vajpayee was the Prime Minister.

The foundation stone for the access road to the South Portal of the tunnel was laid on May 26, 2002.

The breakthrough from both ends was achieved on October 15, 2017.

The Union Cabinet met under the chairmanship of Prime Minister Narendra Modi on December 24, 2019 and decided to name the Rohtang Tunnel as Atal Tunnel to honour the contribution made by the former Prime Minister Atal Bihari Vajpayee.