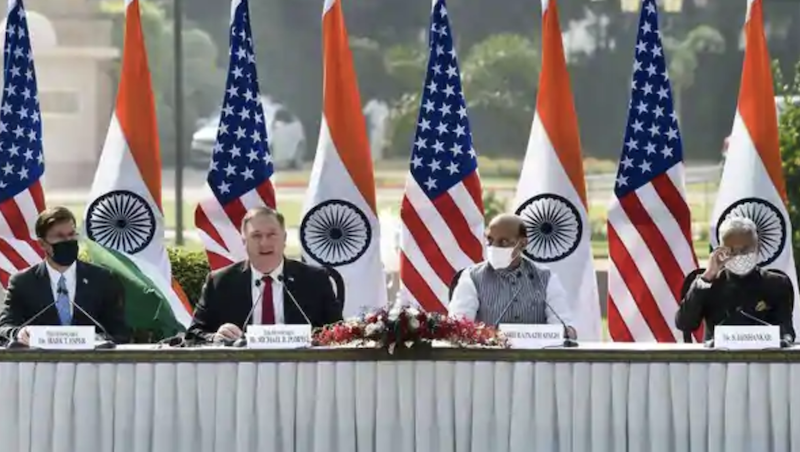 New Delhi: With India and the United States signing the Basic Exchange and Cooperation Agreement for geospatial cooperation, India’s defence minister, Rajnath Singh, on Tuesday described it as “significant move”.

The pact would allow both the countries to share sensitive information regarding satellite and sensor data.

The crucial defence pact was signed after discussions between Singh and and his visiting US counterpart, Mark T Esper.

Addressing a joint statement after signing the pact, Singh said, “During the meeting today, we have had comprehensive discussions on key aspects of our bilateral and multilateral cooperation. We considered the major challenges we face.”

“We continued our discussions on larger regional and global perspective today over the 2+2 dialogue,” he added.

The defence minister said signing of the BECA after inking the LEMOA in 2016 and COMCASA in 2018 is a significant achievement in that direction.

Singh added, “We also agreed that upholding rules-based international order respecting rule of law and freedom of navigation in the international sea and uploading territorial integrity and sovereignty of all states are essential.”

The US secretary of state, Michael Pompeo, mentioned the killing of 20 Indian Army personnel at eastern Ladakh’s Galwan valley after a clash with China’s People’s Liberation Army and said his country stands with India to deal with any threat.

“The US and India are better aligned to protect our democracies and shared values,” Pompeo also said during the joint statement.

“Our leaders and citizens see with increasing clarity that Chinese Communist Party is no friend to democracy, rule of law and transparency,” Pompeo said taking shots at China,” adding “I am glad to say India and US are taking all steps to strengthen cooperation against all threats and not just those posed by CCP.”

“We continued our discussions on larger regional and global perspective today over the 2+2 dialogue,” Pompeo said.

BECA is considered the last of the foundational agreements between India and the US.

The agreement was proposed between the National Geospatial-Intelligence Agency of the US department of defence and the defence ministry and allows India and the US to share military information which includes maps, nautical and aeronautical charts, commercial and other unclassified imagery, geodetic, geophysical, geomagnetic and gravity data.

Most of the information that will be shared under the agreement will be that of the unclassified category, but there is a provision of sharing classified information as well.