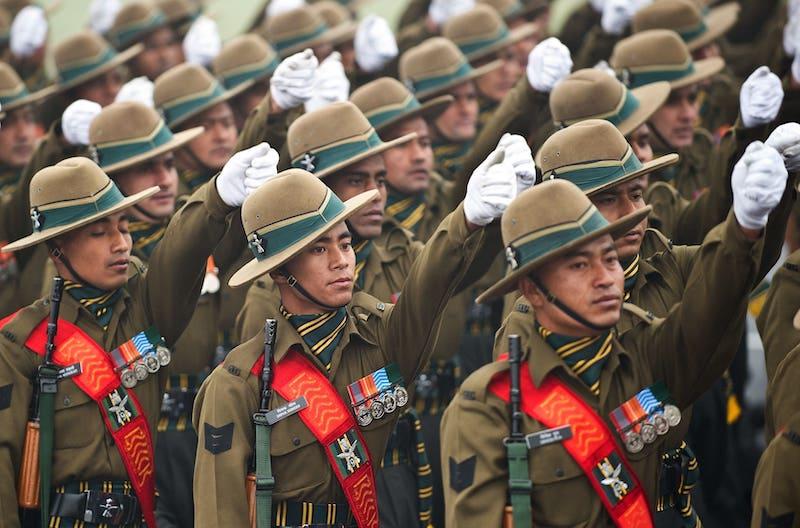 A Gorkha Rifles contingent of the Indian Army marching at Rajpath, New Delhi, during a Republic Day parade. (Representational photo)

New Delhi: Nepal has announced to put on hold the recruitment of its youths under the controversial Agnipath scheme as Agniveer soldiers in the Indian Army until further deliberations. This comes just days before the Indian Army chief General Manoj Pande is scheduled to visit Nepal.

The scheme, which India introduced announced in June, allows new recruitments in the Indian military’s three services for just four years without rank and post-release benefits except a one-time lump sum amount. After that, only 25 per cent of the Agniveers may be recruited back in the service as regular servicemen or servicewomen with their ranks starting from the bottom of the military hierarchy.

The recruitment process for Gorkha soldiers from Nepal in the Indian Army was to start in the Himalayan country from August 25 for.

On Thursday, Nepal’s foreign minister, Narayan Khadka, and the Indian ambassador to Nepal, Naveen Srivastava, held a meeting to discuss the issue. In the meeting, the Nepalese side informed him to wait on the plan to recruit Nepalese youths under the scheme, which is meant for four years with no post-retirement benefits. Khadka said this issue would be discussed between other political parties of his country as well

The minister told the ambassador that if the Nepalese youths are to be recruited for four years with no pensions, there is a need to discuss the matter with all political parties in Nepal and build consensus. Till further decision it should be put on hold.

Currently, there are around 25,000 Nepalese Gorkhas serving 39 battalions in 7 Gorkha regiments in the Indian Army.

Prior to the introduction of the Agnipath scheme, the Nepalese youths were being recruited under the 1947 tripartite agreement between India, Nepal and Britain, which allowed continued recruitment of Nepalese citizens into the armies of India and Britain.

The agreement, which is officially called the “Memorandum of Agreement on Recruitment of Gorkha Troops” was signed on May 1, 1947 and ratified on November 9, 1947. At the signing of the treaty, Nepal had asked that the Gorkha troops should not be employed against Gorkhas and Hindus, there should be no discrimination, they shall be officered by their own and also not to be treated as mercenaries.

Later, in 1950, India and Nepal signed the “Treaty of Peace and Friendship”, which reinforced the right of Nepalese citizens to work in India and for equal national treatment.

There was no mention of any terms of engagement or other benefits in the annexure.

An Indian Army official said that the Agnipath scheme doesn’t violate the tripartite agreement or discriminates between Indian and Nepalese recruits. He said the Nepalese Gorkhas would get same salaries and facilities as what their Indian counterparts would.

India was to hold recruitment rallies in Nepal in two phases between August 25 and September 7 in Butawal and September 18 onwards in Dharan.

The Indian Army chief General Manoj Pande will visit Nepal from September 4 to September 8, where he will be conferred upon the honorary rank of General of Nepal Army by the Nepalese president, Bidya Devi Bhandari, at an event in Kathmandu. It may be noted that the chief of the Nepalese army is also conferred upon the honorary title of General of the Indian Army by the Indian president. He will also hold talks with senior Nepalese government and military officials during his visit. The Agnipath scheme is expected to come up during the talks.