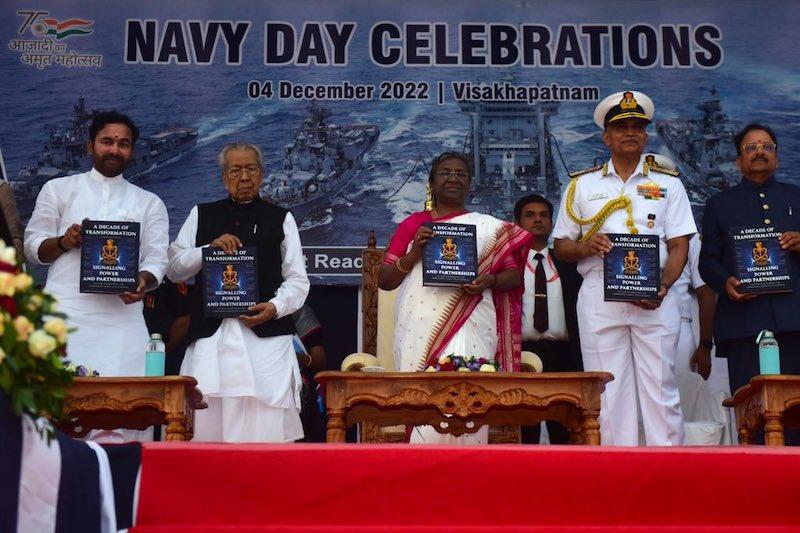 New Delhi/Visakhapatnam: India celebrated its Navy Day for 2022 on Sunday. The official celebrations led by President Droupadi Murmu was held in Visakhapatnam. Keeping with the official protocol and tradition, the president, who is the supreme commander of India’s armed forces, was the guest of honour in the event.

During the event, the president witnessed an operational demonstration by the Navy. She also virtually inaugurated and laid the foundation stones of various projects of the defence ministry, road transport and highways ministry, and tribal affairs ministry.

President Droupadi Murmu witnessed the Operational Demonstration by the Indian Navy at Visakhapatnam on the occasion of Navy Day. pic.twitter.com/KUc8RUuW0N

Speaking on the occasion, the president congratulated all officers and other ranks, and their families on the Navy Day. She said that we celebrate this day to commemorate the Navy’s valiant actions in the 1971 Bangladesh Liberation War, contributing to India’s historic victory. She said it was a day to remember and honour those who sacrificed their lives for the nation, thus etching a permanent place for themselves in history and continue to inspire every generation.

This is the first time the official Navy Day celebrations were held outside New Delhi.

Earlier, the prime minister, Narendra Modi, and the defence minister, Rajnath Singh, led the nation in sending out the greetings.

Lauding the Navy, Modi said Indians are proud of their maritime history and added, “The Indian Navy has steadfastly protected our nation and has distinguished itself with its humanitarian spirit during challenging times.”

Best wishes on Navy Day to all navy personnel and their families. We in India are proud of our rich maritime history. The Indian Navy has steadfastly protected our nation and has distinguished itself with its humanitarian spirit during challenging times. pic.twitter.com/nGxoWxVLaz

Greeting the Navy on the occasion, Rajnath Singh said: “The Indian Navy is at the forefront of keeping our country safe by ensuring impeccable maritime security. The nation is proud of Indian Navy’s valour, courage, commitment, and professionalism.”

Greetings to all @IndianNavy personnel on #NavyDay. The Indian Navy is at the forefront of keeping our country safe by ensuring impeccable maritime security. The nation is proud of Indian Navy’s valour, courage, commitment and professionalism. pic.twitter.com/3UA77vBIH1 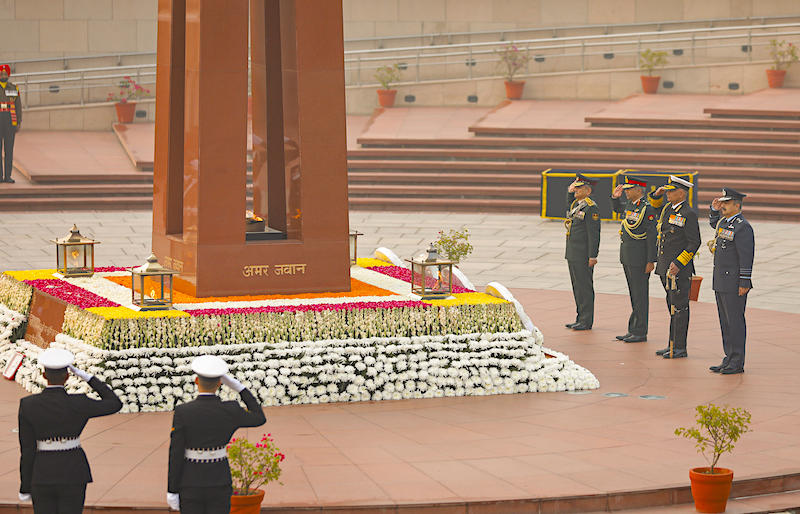 The CDS and chiefs of the triservices paid homage to India’s fallen servicemen at the National War Memorial in New Delhi, on Navy Day 2022. (Photo: Indian Army)

On Sunday morning, the chief of defence staff, General Anil Chauhan; the Air Force chief, Air Chief Marshal Vivek Ram Chaudhari; the Navy chief, Admiral Radhakrishnan Hari Kumar; and the Army chief, General Manoj Pande; laid wreaths in the memory of the fallen soldiers who sacrificed their lives for the nation at the National War Memorial in New Delhi.