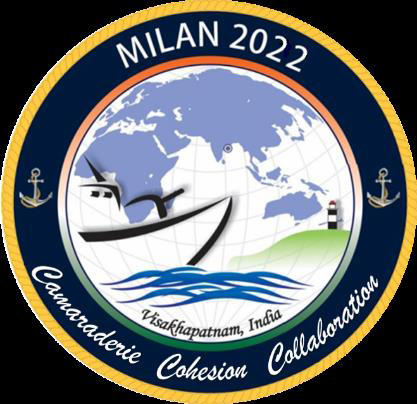 Visakhapatnam :  The Indian Navy’s multilateral exercise Milan 2022 is set to be organized in two phases from February 25 in the ‘City of Destiny’, Visakhapatnam.

According to Indian Navy officials, the exercise will be conducted in two phases. “Milan 22 is being conducted over a duration of nine days in two phases,” said senior Navy official, “With the harbour phase scheduled from February 25 to 28th and sea phase from March 1st to 4th.”

India is celebrating the 75th year of its independence this year, and Milan 22 provides an opportunity to opportunity to commemorate this milestone with friends and like-minded nations.

The theme of the exercise is ‘Camaraderie - Cohesion - Collaboration' which aims to project India as a responsible maritime power to the world at large.

The aim of the exercise is to hone operational skills, imbibe best practices and procedures, and enable doctrinal learning in the maritime domain, through professional interaction between friendly navies.

It is a biennial multilateral naval exercise incepted by the Indian Navy in 1995 at the Andaman and Nicobar Command. Since its inception, the event has been held biennially except for 2001, 2005, 2016 and 2020.

Interestingly, starting with the participation of only four countries, Indonesia, Singapore, Sri Lanka and Thailand, in the 1995 edition, the exercise has since transitioned leaps and bounds in terms of the number of participants and complexity of exercises.

Originally conceived in consonance with India's 'Look East Policy', Milan expanded in the ensuing years with the government's 'Act East policy' and Security And Growth for All in the Region (SAGAR) initiative, to include participation from island nations in the Western Indian Ocean Region as also IOR littorals.

Participation increased from six regional countries to 18 countries in 2014 which included IOR littorals.

With the Indian Navy's engagement with friendly foreign countries expanding over the decades, a need was felt to further consolidate the naval cooperation by enhancing the scale and complexity of the exercise and engaging both regional and extra regional navies of the world.

Considering the infrastructure requirements of a large naval gathering, it was decided to shift the event to the mainland, and Visakhapatnam, being the Headquarters of the Eastern Naval Command, was nominated to host the event.

Milan 22 will witness its largest ever participation, with more than 40 countries sending their warships and high-level delegations.

This edition would be larger in 'scope and complexity' with the focus on exercises at sea including exercises in surface, sub-surface and air domains and weapon firing.

Naval commanders to be commenced from April 25

In pics: Largest ever MILAN maritime exercise underway in Vizag

Indian Navy all geared up for the forthcoming President's Fleet Review