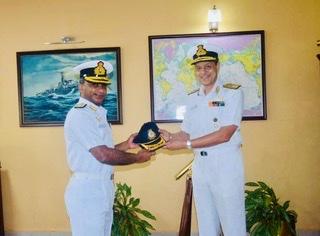 Rear Admiral Venkat Raman, is an alumnus of the National Defence Academy Khadakvasla. Commissioned on January 1, 1990, the Rear Admiral is a specialist in Communications and Electronic Warfare and has tenanted various appointments onboard frontline warships of the Indian Navy.

His sea tenures include command of the stealth frigate Tabar. Prior to taking over command at Goa, the Rear Admiral was heading the Directorate of Naval Intelligence at Naval Headquarters.

He has completed several post graduate study programmes, including Masters in Defence and Strategic Studies  in addition to a Masters in Management Studies from the College of Defence Management.