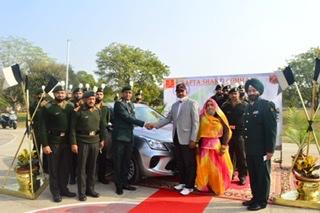 Jaipur: Directorate of Indian Army Veterans (DIAV) in association with two-wheeler maker TVS Motors have presented mobility equipment to the disabled soldiers in Rajasthan’s Jaipur, Sikar, Jhunjhunu and Alwar and in Haryana’s Jind, Sirsa and Rohtak.

“This initiative conducted under the aegis of Sapta Shakti Command of Indian Army, included presentation of 15 modified Auto Scooters and one modification of car to the entitled bravehearts who answered the call of duty with total disregard to own life and limb, displayed raw courage and unparalleled valour in the face the enemy in various operations  and sustained injuries,” an official said.

Every year 16th December is celebrated as 'Vijay Diwas', the day when a  swift 14 day operations conducted by Indian Armed Forces in 1971 against Pakistan led to the liberation of the present day Bangladesh.

To commemorate the 50th year of this great victory, the Directorate of Indian Army Veterans (DIAV) branch organised the event whose aim was to pay a humble tribute and felicitate the Bravehearts of Indian Army, belonging to Rajasthan and Haryana, he said.

The ceremony included presentation of mobility equipment to the soldiers at their desired delivery locations, followed by interaction with veterans and their families, the official said.

“The initiative of DIAV will go a long way in providing mobility to the disabled soldiers, thereby assisting and aiding them in their rehabilitation and alleviating their personal discomfort, as also projecting a glorious image of the Indian Army amongst not just our veterans and their families, but also in motivating the youth and inculcating a patriotic fervour in the hearts and minds,” the official added.