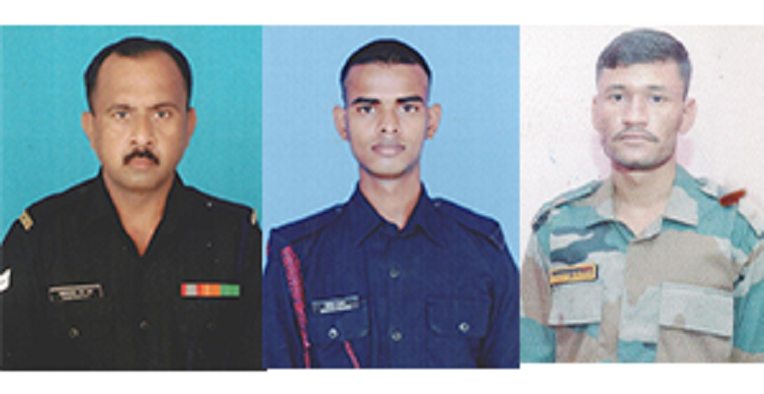 Srinagar: Three soldiers, part of a patrol party near the LoC in Machhal Sector, Kupwara Jammu & Kashmir, made supreme sacrifice in the line of duty.

A routine link patrol was undertaken on the intervening night of November 17-18 in Machhal Sector. During the patrol, Gunner Souvik Hazra, complained of breathing difficulty.

In the meanwhile, medical situation of Gunner Souvik Hazra, who was diagnosed with hyperthermia, started deteriorating. An air evacuation request was raised at about 10.30 AM and he was evac to 168 MH, Kupwara.

The braveheart later succumbed to his medical condition at the Military Hospital.

The search party at the snow slide site located Lance Naik Mukesh Kumar. He was moved to the nearby post and further evacuated to 168 MH, Kupwara at about 02.30 PM by the helicopter. The braveheart, however succumbed to his medical condition at the Military Hospital.

In the meanwhile, a specialised rescue team along with Avalanche rescue dog from Z Gali were airlifted and immediately inducted to locate the missing individual.

After extensive search, Naik Gaikwad Manoj Laxman Rao was recovered at around 04.30 PM and was air evacuated to 168 MH, Kupwara.

The braveheart also could not be revived and succumbed to his medical condition.

Late Naik Gaikwad Manoj Laxman Rao was forty one years old and had joined Army in 2002.

He belonged to Village Chunchkkede, Post Dhule, Tehsil Dhule, District in Maharashtra. The braveheart is survived by his wife.

Late Lance Naik Mukesh Kumar was twenty two years old and had joined Army in 2018. He belonged to Village Sajwantgarh, Post Rodu, Tehsil Ladnun, District Nagaur in Rajasthan. The braveheart is survived by his mother.

Late Gunner Souvik Hazra was twenty two years old and had joined Army in 2019. He belonged to Village Khamarberia, Post Onda, Tehsil Bankura Sadar, District Bankura in West Bengal. The braveheart is survived by his uncle.

The mortal remains of the three bravehearts will be taken for last rites to their respective native places, where they would be laid to rest with full military honours.

"In this hour of grief, the Indian Army stands in solidarity with the bereaved families and remains committed to their dignity and wellbeing," an Indian Army official said.