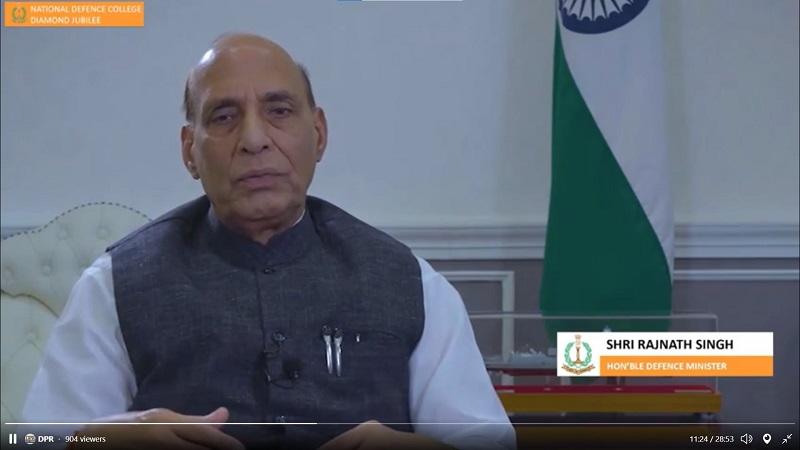 New Delhi: Amid heightened border tension with China along the Line of Actual Control (LAC) in eastern Ladakh, Defence Minister Rajnath Singh on Thursday said that India was determined to protect its sovereignty and territorial integrity in the face of unilateralism and aggression, no matter what the sacrifice.

The defence minister said India is a peace-loving country but has been facing challenges on its borders.

Speaking on the Diamond jubilee webinar of the National Defence College (NDC), he said, “We believe that differences should not become disputes. We attach importance to the peaceful resolution of differences through dialogue. We respect various agreements and protocols that India has entered into for peace and tranquility on our borders.”

It gives me immense pleasure to address the NATIONAL DEFENCE COLLEGE,which is the highest seat of strategic learning in our country on the occasion of its Diamond Jubilee. Congratulations to the Commandant and NDC staff on completing 60 years of dedicated service to the Nation:RM

‘‘However, India is determined to protect its sovereignty and territorial integrity in the face of unilateralism and aggression, no matter what the sacrifice,” the minister added.

Mr Singh said that in the past six years, India has focused on forging partnerships with like minded nations that shows its commitment to be a part of the Indo-Pacific initiative.

“Our strategic partnership with the US is stronger than ever before. Similarly, India’s friendship has grown tremendously with Japan over the last few years as well. The India-Australia virtual summit in June 2020 has provided a fillip to our already strong comprehensive strategic partnership. We share common concerns with Australia and shared values,” the minister said.

Speaking about India’s relation with Russia, he said, “Our two countries have weathered many a challenge in the past through our close understanding and appreciation of each other’s concerns and interests. We continue to build upon our relationship with Russia and especially in the military sphere.’’

It is pertinent to mention here that the minister has visited Moscow twice since India-China border standoff errupted in early May this year.

On Pakistan, he said, “Pakistan continues to remain adamant in the use of terrorism as state policy. However, we have achieved substantial success in working with progressive and like-minded countries to not only expose Pakistan’s regressive policies but also make it increasingly difficult to continue with its previous business as usual approach.”

The minister said that peace can only be ensured through the ability to deter war and for this, a long term policy of indigenisation is key.

“This will not only be achieved through encouragement of public and private sector industries in India as has been outlined in the recent procurement policies, but also by forging partnerships with major OEMs who are keen to invest and build in India,” he said.