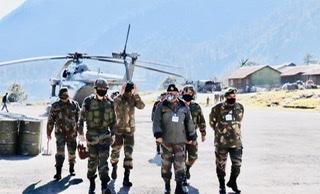 Guwahati: Chief of Defence Staff (CDS) Gen Bipin Rawat on Saturday visited the forward air bases in eastern Sector in Arunachal Pradesh and said nothings can deter the Indian Armed Forces on remaining steadfast in their call for duty.

His visit comes after completion of one year in office.

Gen Rawat interacted with Army, ITBP and SFF soldiers deployed at the forward most air maintained post in Dibang Valley and Lohit Sector of Arunachal Pradesh.

Complimenting the soldiers for the innovative measures adopted to maintain effective surveillance and enhanced operational readiness, he said that only Indian soldiers could remain vigilant under such challenging situations ever willing to go well beyond the call of duty to safeguard the borders.

“Nothing can deter the Indian Armed Forces on remaining steadfast in their call for duty,” he said.

The CDS is responsible for synergising training, logistics, procurements and planning between the Army, the Indian Air Force and the Navy.

Although a four-star general like the Army, Navy and Air Force chiefs, General Rawat act as the 'first among equals' and arbitrator in matters where the three services express differences.