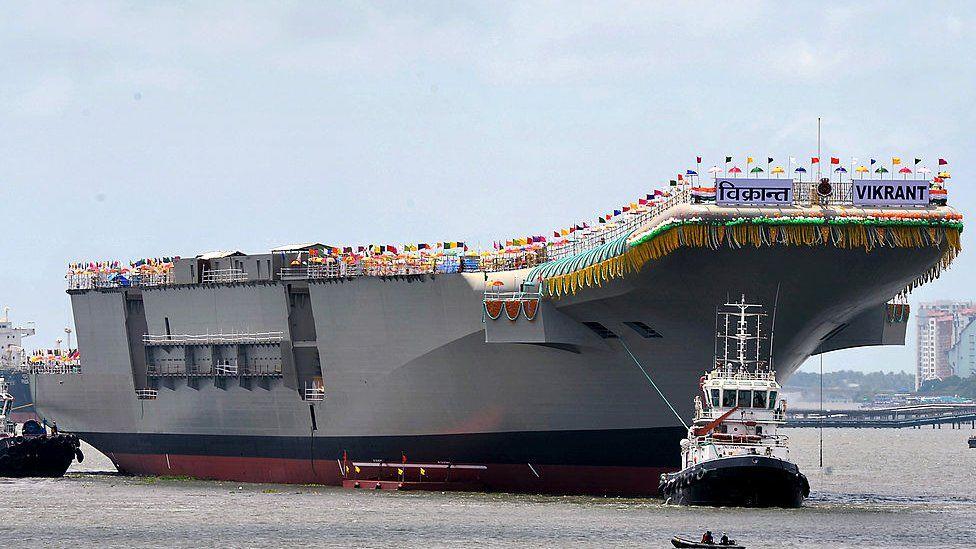 Kochi: India’s first indigenously built aircraft carrier (IAC-1) was commissioned in the Indian Navy as Indian Naval Ship (INS) Vikrant on Friday. The prime minister, Narendra Modi, commissioned the warship at Cochin Shipyard Limited here in the presence of the defence minister, Rajnath Singh; the Navy chief, Admiral R Hari Kumar; and other dignitaries. Built over a cost of ₹20,000 crore, the carrier successfully completed the fourth and final phase of the sea trials in July.

Vikrant – which means powerful, courageous, victorious – gets its name from its illustrious predecessor. That aircraft carrier, which was originally named HMS Hercules, was bought from the United Kingdom, and was commissioned in 1961 and renamed as INS Vikrant. It had played a stellar role in the 1971 Bangladesh Liberation War. [More on it here.] It was decommissioned on January 31, 1997.

At 262 metres in length and 62 metres in width, the brand-new INS Vikrant is the largest warship to be built in India. Work on the carrier’s design began in 1999, and the keel was laid in February 2009. The carrier was floated out of its dry dock on December 29, 2011. Then, after nearly two years, it was launched on August 12, 2013. Its basin trials were completed in December 2020. Sea trials for this warship started in August 2021.

The 45,000-tonne carrier can have 30 aircraft on board, including fighter jets and helicopters. The warship has over 2,300 compartments, including special cabins for women officers, and will have a crew of around 1,700 people. The carrier has a top speed of around 28 knots and a cruising speed of 18 knots with sea endurance of about 7,500 nautical miles in a single sail.

In August, the vice-chief of the Navy, Vice Admiral SN Ghormade had said INS Vikrant will have either the Rafale (Marine) from France’s Dassault Aviation or the F/A-18 Super Hornet Block III from the United States’ Boeing as the carrier’s fighter aircraft. However, it said the selected fighter would be for “interim arrangement” with the carrier ultimately getting the indigenous TEDBF (Twin Engine Deck-Based Fighter) fighter aircraft.

With the commissioning of INS Vikrant, India has joined an elite club of nations that has designed and built an aircraft carrier indigenously.

Shaping a Dream Building a Nation

Addressing the gathering from on board the carrier, the prime minister said every Indian was witnessing dawn of a new future. He also said the commissioning of warship was the “manifestation of the dream of the freedom fighters in which they envisioned a capable and strong India.”

Commenting on the changing geostrategic situation, Modi said that in the past, India ignored the security concerns in the Indo-Pacific and the Indian Ocean region, but now, the region has become major defence priority for India.

In his address, Rajnath Singh said, “INS Vikrant is a glowing symbol of an aspirational and self-reliant ‘New India’. It is an icon of pride, power and resolve of the nation. Its commissioning is an unprecedented achievement in the path of building indigenous warships. The Indian Navy’s tradition is ‘old ships never die.’ This new avatar of Vikrant, which played a stellar role in the 1971 war, is a humble tribute to our freedom fighters and brave soldiers.”

Singh also asserted that it is a key responsibility of the Navy to secure the country’s maritime interests for uninterrupted maritime trade amid the constantly changing global situation. He commended the Navy for always being the “first responder” in times of any national or international crisis and showed confidence that the commissioning of carrier will further enhance the force’s capability. He also assured friendly foreign countries that India was fully capable of meeting the collective security needs of the region.

Speaking on the occasion, Admiral R Hari Kumar voiced the Navy’s resolve to become completely self-reliant by 2047 with “Made in India” ships, submarines, aircraft, unmanned vessels, and systems. Admiral Kumar also exhorted the commanding officer and crew of INS Vikrant to take forward the proud legacy of erstwhile Vikrant which served the country for 36 glorious years.