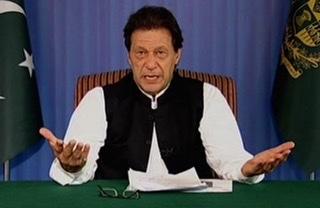 At a time when Pakistan desperately needs focussed leadership to ameliorate its internal problems, the Imran Khan led PTI government is frittering away its mandate in diverting public attention from core issues by empty rhetoric for which there are very few takers. In recent weeks Mr Khan has stepped up his vituperations on social media accusing India of conducting “false flag operations against Pakistan”.

Such claims are not only ludicrous because the reality is in fact quite the opposite, they also gradually dent the credibility of the government of Pakistan. India has already dismissed these claims as “baseless and laughable”.

On the contrary, it is Pakistan which needs to come clean about its role in sponsoring terrorism. It is no surprise that the global watchdog Financial Action Task Force (FATF) has identified Pakistan as one of the jurisdictions with ‘strategic deficiencies’ in their regimes to counter money laundering, terrorist financing, and proliferation financing and therefore the country continues to be on the FATF’s ‘grey list’.

Pakistan was placed on the ‘grey list’ in 2018, at about the same time that the United States cancelled a 300-million-dollar aid under the Coalition Support Fund (CSF) even as President Donald Trump at that time had accused Islamabad of rewarding past assistance with “nothing but lies & deceit.” Trump had also suspended Pakistan’s participation in the International Military Education and Training Program (IMET) for more than a year.

It is not only the United States, which has become wary of Pakistan’s unremitting support of terrorism as an instrument of state policy.

Traditional friends such as Saudi Arabia are also increasingly losing patience with having to deal with a truant partner.

It is no coincidence that Riyadh has recently recalled a billion-dollar loan from Pakistan after the latter criticised it for not supporting it on the Kashmir issue in the OIC.

Unsurprisingly, it was China which helped Pakistan repay the loan to Riyadh.

In a region where an isolated Pakistan finds itself sans friends – India, Iran and Afghanistan have repeatedly called out Islamabad on terrorism and Maldives refused to support it on the Kashmir issue in the OIC – it has nowhere else but Beijing to turn for assistance.

China’s “all weather” friendship with Pakistan, of course, hinges on its own economic and political interests.

A recent report carried by a Sydney-based news portal exposes how Pakistani soil is being used by China to carry out experiments on lethal biological warfare agents.

These experiments are part of a secret three-year deal to expand potential bio-warfare capabilities in collaboration with Pakistan military’s Defence Science and Technology Organization (DESTO).

This development represents a significant threat to regional and global security because of the well-established linkages between the Pakistani military establishment and the multitude of homegrown and transnational terrorist organisations that are nurtured, supported and used by the Pakistani state.

While the risks of Pakistani nuclear weapons falling into the hands of terrorists are yet to be addressed and mitigated, there is now another potential hazard of biological weapons that could much easily and surreptitiously be transferred to terrorists.

The nexus between Pakistani military and terrorist organisations is a contemporary subject of research in many academic and military institutions.

A report published in 2017 by the European Foundation for South Asian Studies explores the ‘unholy alliance’ of the Pakistan Army and terrorism and notes that “the [Pakistan] Army along with the ISI still distinguishes between ‘bad’ terrorists (those who target Pakistani Security Forces) and ‘good’ terrorists (those who advance its strategic objectives vis-á-vis Afghanistan and India)”.

Earlier, in 2011, Admiral Mike Mullen, the then Chairman of the United States Joint Chiefs of Staff had testified that the “Haqqani network... acts as a veritable arm of Pakistan's Inter-Services Intelligence Agency”.

The most damning proof of Pakistan’s nexus with terrorismis its complicity in harbouring Osama Bin Laden in Abbottabad, where he was killed in raid conducted by the US Navy SEALs.

India, of course, has time and again over the last three decades exposed Pakistan’s role in sponsoring terrorist attacks against innocent civilians and itsmilitary establishments.

Given the particularly well-chronicled history of Pakistan’s support of terror and its misadventures against India, it is not difficult to understand the reasons behind Mr Khan’s tirade.

By accusing India of conducting ‘false flag operations’, Pakistan seeks to kill two proverbial birds with one stone. Firstly, it hopes to blame India of orchestrating a terror attack on its own citizens – a proposition that is both absurd and feckless – and secondly, it may want to pre-empt a military response by India.

To be sure, after Pulwama and the reprisal which followed in Balakot, Pakistan’s options of employing terrorism and subversion in Indian territory have become very limited.

Therefore, while on one hand the gap between the conventional military capabilities of Pakistan and India is steadily increasing, on the other hand the former’s strategy of using state-sponsored terrorism appears to be failing due to a comprehensive political, social, economic and military approach that India has adopted to secure its vulnerabilities.

The hugely successful District Development Council (DDC) poll in J&K in December 2020 signifies a distinct shift in the political environment in the region which is no longer conducive for subversion by inimical actors.

There is perhaps another important reason why Pakistan continues to falsely accuse India.

In his 30 months of premiership, Mr Khan’s government has been bedraggled and mired in several domestic and international challenges, which have put governance in sharp focus.

For a developing country like Pakistan, which is under a mountain of debt and already part of an IMF bailout plan, the global COVID-19 pandemic and its consequences for the already dwindling economy has presented an insurmountable challenge.

Inflation in early last year, according to a report published in Dawn rose to a 12-year high while the country’s economy contracted for the first time since 1968 and the Pakistani rupee tumbled to an all-time low in August. This was accompanied by one of the worst fuel crises in recent years. Even more challenging has been the internal security situation in Pakistan which is rife with sectarianism, religious extremism, social unrest and separatism.

In the backdrop of the increasing economic distress and political turbulence in Pakistan, Mr Khan’s truculent verbiage becomes amply clear.

In fact, not only Mr Khan but almost all his predecessors have falsely accused India and used anti-India rhetoric to arouse nationalistic emotion and divert public attention from real issues.

Instead of attempting to malign India, Pakistan must accept the fact that it has been crippled by terrorism– a monster that it has raised in a miscalculated blunder to compensate its lack of military power - more than anyone else. It must stop financing and supporting terrorists and should earnestly cooperate with the international community in combating terror.