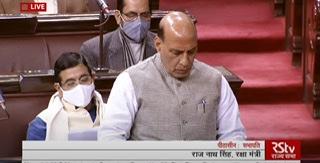 New Delhi: A day after Beijing announced that the disengagement in the Pangong-tso area has started between Indian Army and China’s People’s Liberation Army, the defence minister, Rajnath Singh, on Thursday, informed the Rajya Sabha that the troops deployed in the forward areas will be moved back in a phased, coordinated and verified manner.

“China will move its troops to east of Finger 8 while India will return at its permanent base at Dhan Singh Thapa post near Finger 3. The status quo will be maintained which was during April 2020.”

Traditional patrolling will not take place for the time being. It would be started after consensus reached at military and diplomatic levels, he said.

Singh also said, “In this talk, we have lost nothing. There are some outstanding issues left with regards to deployment and patrolling, we will take them up in the next meeting.”

Both sides have agreed that the disengagement process should be completed as soon as possible through bilateral agreements and protocols, he said.

As per the plan, the Chinese troops will go back to their position.

On change of status along the line of actual control (LAC), he said, “Chinese actions have impacted the bilateral ties. But I am immensely proud that the Indian armed forces have bravely faced the challenges at the border. We have made it clear to China that no attempt should be made to change the status quo.”

“We have had nine round of talks between the two countries and have clarified that both forces should return to their posts,” Singh said.

Continuing, Singh said China attempted repeated transgressions in 2020. He said, “India has always rejected China's claims and has maintained that bilateral ties can be achieved only through cooperation from both sides. We have always maintained that disengagement is crucial for peace and tranquility.”

Outlining the immediate future of the de facto border, Singh told Parliament that the LAC should be accepted by both the sides. He said, “We have clarified to China that trying to unilaterally change the status is not acceptable (to India). Not an inch of land will be relinquished.”