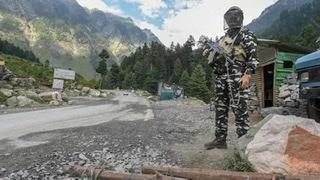 New Delhi: The Indian Army on Monday handed back the apprehended Chinese soldier at Chushul-Moldo in eastern Ladakh.

The soldier was apprehend near Gurung hill in the Chushul sector on Friday morning.

“The PLA soldier who had been apprehended on 08 January 2021, has been handed back to China at Chushul - Moldo at 10.10 AM today,” an Indian Army official said here on Monday.

In an official statement, the Indian Army had said the Chinese soldier was apprehended on the Indian side during the early hours of Friday. He was taken into custody by the Indian Army.

“The PLA soldier had transgressed across the LAC and was taken into custody by Indian troops deployed in this area. Troops from either side are deployed along the LAC since friction erupted last year due to unprecedented mobilisation and forward concentration by Chinese troops," the Indian Army said.

The army said the Chinese soldier is "being dealt with as per laid down procedures".

In October 2020, the Army had captured a PLA soldier, identified as Corporal Wang Ya Long, near Demchok area of Ladakh.

The PLA soldier was carrying civil and military documents when he was captured in Ladakh by the Indian Army.

Corporal Wang Ya Long was provided medical assistant after he was captured and was handed back to China a day later on October 21.