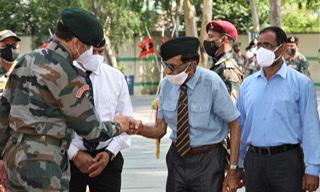 Udhampur: Northern Command Army Commander Lt Gen Y K Joshi unveiled the ‘Naushera’ gate on Thursday at Udhampur Military Station to honour the valiant soldiers of Northern Command who made the supreme sacrifice in the Battle of Naushera in the year 1948 for the territorial integrity and sovereignty of the country.

Northern Command has been at the forefront of operations ever since its inception and has kept the flag of the Command, the Indian Army and nation flying high. Being one of the operational commands of Indian Army, Northern Command is always committed in Operations.

The nation has witnessed the saga of courage, valour & sacrifice of gallant soldiers of Northern Command who have fought the most important battles at the toughest locations.

Over these glorious years, Military Stations have always been a reflection of valour and sacrifice of the Indian Army. The various gates of Udhampur Military Station are named after important operational locations like Hajipir, Rezangla, Basantar, Tololing, and Tiger Hill. 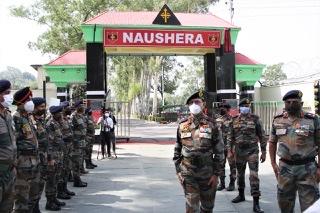 The Battle of Naushera is yet another decisive and historic victory of Indian Armed Forces as it was a serious blow to Pakistan. This resulted in the successful defence of Naushera and gained significance in the history of the operations in Jammu & Kashmir.

In remembrance of the valiant soldiers who fought this battle and laid down their lives, the Army commander named one of the important gates of Udhampur Military Station as ‘Naushera’ and unveiled it.

He paid rich tributes to the gallant soldiers who gave the ultimate sacrifice in the service of our nation in the best traditions of the Indian Army. All senior Army Officers & veterans of Udhampur Military Station attended the event.