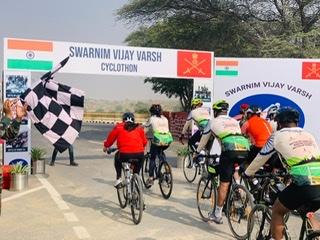 The cyclothon was organised to commemorate the 50 years of India-Pakistan 1971 war.

The gallant officer was part of the famous CHACHRO RAID that was conducted by Indian Army during 1971 Indo- Pak war.

The flagging in ceremony for the team of Konark Corps was graced by the presence of Veterans residing at  border town, a defence spokesperson said.

The Cyclothon commenced on November 26 from border post Lakhpat.

During the conduct of the 1971 Cyclothon, many medical camps at different locations across Gujarat and Rajasthan were organised where medical check up of Veterans their Next Of Kin was done.

Further, besides fostering the spirit of adventure, the cyclists spread Covid-19 awareness and ensured extensive Mel Milap with the Veteran Fraternity.

Masks and Covid-19 prevention lists were distributed.  Information on the procedure to join the Indian Army was given to the youth.

As part of the flagging in ceremony, the veterans laid wreaths in honour of the war heroes at Longewala, planted saplings, toured the Yudh Sthal and were felicitated prior to culmination of the event.