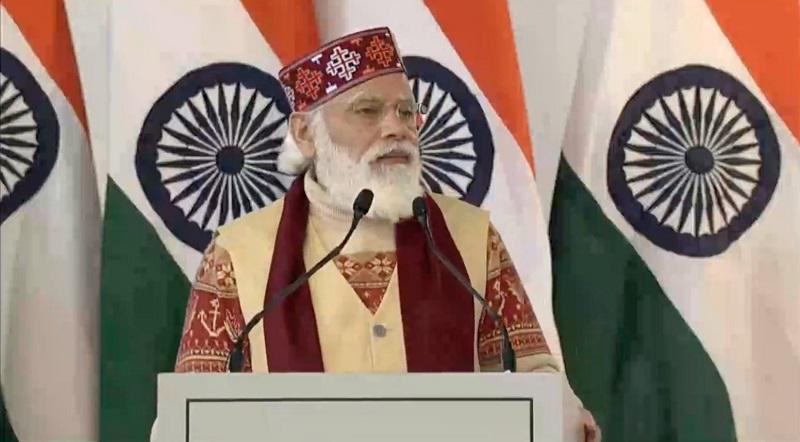 Speaking after the inauguration of world’s longest highway Atal Tunnel here in Rohtang, the prime minister said the tunnel has not only realised Bharatiya Janata Party (BJP) leader Atal Bihari Vajpayee’s dream but has also ended the decades-long wait of the people of Himachal Pradesh.

The 9.02km long Atal Tunnel, which connects Manali to Lahaul-Spiti valley in the state, will reduce the travelling time by 4-5 hours and distance by 46 kms.

The prime minister said the tunnel will also become the lifeline for Leh-Ladakh and it will remain open throughout the year as opposed to the valley being cut off for about six months every year amid heavy snowfall.

Hailing his government’s “Make in India” initiative, the prime minister said big reforms have been introduced to ensure modern weapons are produced in the country.

During his address, he also informed that work on another bridge Kosi Mahasetu, the foundation of which was laid by Vajpayee in Bihar, has been expedited since 2014.

The Rs 3300 crore-Atal Tunnel, named after former prime minister, built with ultra-modern specifications in the Pir Panjal Range of the Himalayas at an altitude of 3,000 metres from the mean sea level.

The single tube double lane tunnel with a roadway of 8 metres and an overhead clearance of 5.525 metres is horse-shoe shaped and has been designed for a traffic density of 3,000 cars per day and 1,500 trucks per day with a maximum speed of 80 km/hr, according to a statement by the Prime Minister’s Office.

He also thanked the BRO and other professionals involved in the Atal Tunnel making for transforming the impossible into a reality.

PM Modi further added, “Nothing more important to us than protecting country; but there was an era when defence interests were compromised.”

In an indirect reference to border aggression by China, Defence Minister Rajnath Singh said, “Atal Tunnel is going to help the public in general during peacetime while it will help our armed personnel during the war time.”

He thanked the Border Road Organisation (BRO) for completing the project within the allocated fund.

Himachal Pradesh Chief Minister Jairam Thakur said, “The vision of former Prime Minister of India Atal Bihari Vajpayee is getting complete today. This tunnel will help tourism to grow as it will make transportation smooth and fast in major tourist spots in the region. In fact, some more tourism spots will emerge due to the Atal tunnel.”

He thanked PM Modi and Defense Minister Rajnath Singh for taking personal interest in getting the tunnel inauguration done amid COVID-19 challenge.