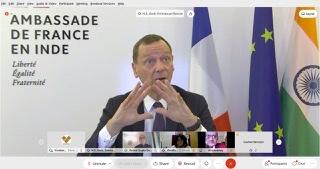 “India will be a member of the UN Security Council for 2 years. This will be a critical occasion for both of us to take initiatives whether it’ll be on the Indo-Pacific region or it is about addressing terrorist threats,” Mr Bonne said during an event organised by think tank VIF here.

On January 4, 2021, India officially began its eighth term as a non-permanent member of the UNSC for a period of two years.

France is a permanent member of the security council.

Mr Bonne also thanked the Indian government and people for their support to France when the country was “under attack by some leaders in Turkey and Pakistan and in other countries”, a veiled reference to the backlash France received from many nations, including Pakistan and Turkey, after the killing of French teacher Samuel Paty.

“We very much appreciate the support we got not only from your authorities but also from Indian civil society when our country was under attack by some leaders in Turkey and Pakistan and in other countries,” he added.

The meetings were a part of the annual strategic dialogue between India and France.