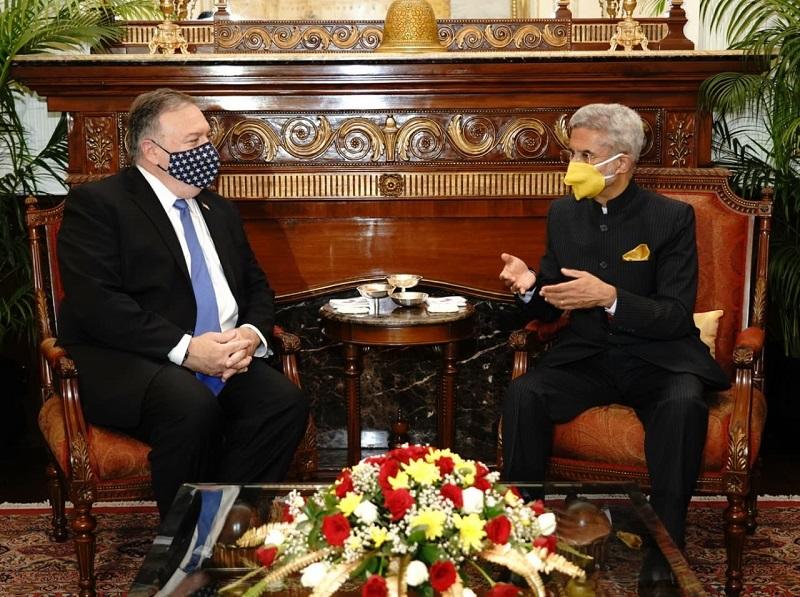 Pompeo and Jaishankar ahead of 2+2 dialogue

The two ministers had warm and productive dinner engagement on Monday during which they followed up on their Tokyo discussions and focussed on key bilateral, regional and global issues, sources in the government establishment said here.

The two sides reviewed progress in bilateral ties over last four years and satisfied that they have grown in virtually every domain including trade, energy, defence and education; practice of consultations on foreign policy issues has also expanded, including regional and multilateral; working more closely in multilateral and plurilateral formats, sources said.

Dr Jaishankar stressed the uniqueness of Indo-US technology and talent flow connections and underlined that a knowledge economy with greater data sensitivity makes an even stronger case for collaboration.

He pointed out an innovation partnership is central to India-US’ future and the policies must be accordingly supportive. “Education is a special bond between us and both sides should work to expand it further,” Dr Jaishankar suggested.

They exchanged views on current global situation and its contemporary challenges, discussed the shared concerns and interests including stability and security in Asia, and how best that can be ensured.

Great discussion with @DrSJaishankar ahead of our third U.S.-India 2+2 Ministerial Dialogue. We agree that the U.S.-India Comprehensive Global Strategic Partnership is critical to the security and prosperity of both our countries, the Indo-Pacific region, and the world. pic.twitter.com/x4YvMt8nRC

Mr Pompeo shared his government’s thinking on Afghanistan while Dr Jaishankar highlighted India’s stakes and its continuing concern that decisions should be made by Afghans themselves without use of force.

He also made clear that cross-border terrorism was completely unacceptable, sources claimed.

Both Ministers also discussed multilateral consultations and cooperation in the context of India's forthcoming UNSC membership.