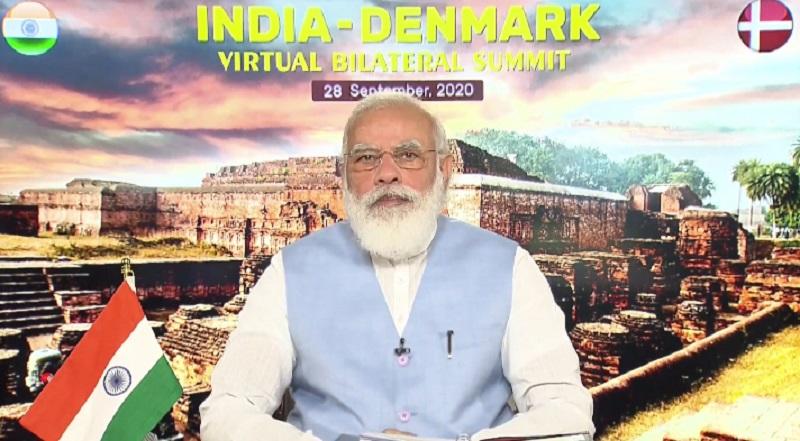 New Delhi: Prime Minister Narendra Modi and his Danish counterpart Mette Frederiksen on Monday agreed to elevate India-Denmark relations to a Green Strategic Partnership in a bid to have shared desire to remain trusted partners.

The partnership would build on and consolidate the existing agreement establishing a Joint Commission for Cooperation between the two countries, a joint statement issued after a vitrual bilateral summit between the prime ministers of two countries held on Monday.

It would envisage cooperation in the field of political, economic, commercial, science and technology, environment, energy, education and culture.

The two leaders expressed their conviction that the step would open a new chapter in the friendly and cooperative relations between them.

‘‘Ambitious goals and actions will be identified within the areas and outlined in an Action Plan that will be worked out and endorsed as soon as possible,’’ the statement said.

The Green Strategic Partnership is a mutually beneficial arrangement to advance political cooperation, expand economic relations and green growth, create jobs and strengthen cooperation on addressing global challenges and opportunities; with focus on an ambitious implementation of the Paris Agreement and the UN Sustainable Development Goals, it added.

The two countries also agreed to be at the forefront in the global fight against climate change.

Both countries have set very ambitious national targets on climate and energy that will contribute to an ambitious implementation of the Paris Agreement.

On environment front, the two leaders agreed to work towards further expanding and strengthening the existing Government-to-Government cooperation on environment, water and circular economy.

They also agreed to strengthen existing City-to-City cooperation between Udaipur and Aarhus and Tumakuru and Aalborg.

On business, trade and shipping, Mr Modi and Ms Frederiksen welcomed the idea of developing partnerships between Governments, institutions and businesses of the two countries with special focus on green and climate-friendly technologies.

On multilateral cooperation, they agree to join efforts and initiatives to support and promote a rule-based multilateral system.

Both sides supported the need for cooperation on promotion of an open, inclusive and rule-based multilateral trading system under the WTO at its core to promote global growth and sustainable development.

Both sides expressed their support for the ongoing discussions to reform the WTO.

Both sides reaffirmed their determination to strengthen cooperation and contribute for comprehensive reforms of the WTO.

Both sides agreed that the reforms need to be inclusive and to be carried out in a transparent manner, high priority being restoration of a full strength Appellate Body as part of the two-tiered Dispute Settlement System of the WTO.