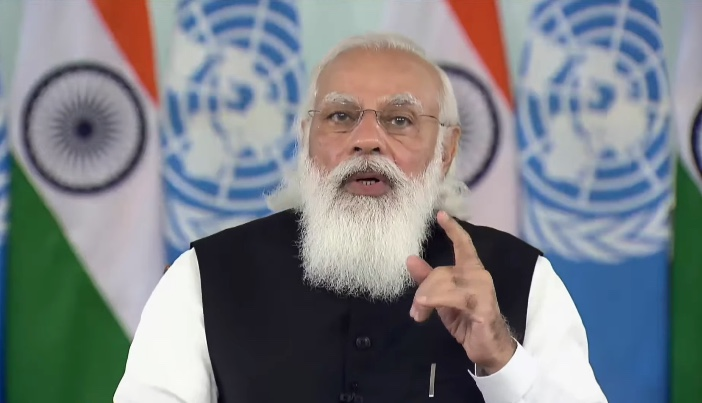 He also said that our shared maritime heritage is facing many challenges. On maritime disputes between many countries, the prime minister said “We must build a framework of mutual understanding and cooperation for the protection and use of our shared maritime heritage. No country can build such a framework alone. This can only be realized through a joint effort. It is with this thought in mind that we have brought this important matter to the Security Council.”

He further suggested five principles —- We should remove barriers from legitimate maritime trade. The prosperity of all of us is dependent on the active flow of maritime trade.

Second principle: The settlement of maritime disputes should be peaceful and on the basis of international law only. This is very important for mutual trust and confidence. It is only through this that we can ensure global peace and stability. With this understanding and maturity, India has settled its maritime boundary with its neighboring country Bangladesh.

The third principle: We should face natural disasters and maritime threats created by non-state actors together. India has taken several steps to enhance regional cooperation on this subject. We have been the first responder in maritime disasters related to cyclone, tsunami and pollution.

The Indian Navy has been patrolling in the Indian Ocean since 2008 to prevent piracy. India's White Shipping Information Fusion Center is increasing shared maritime domain awareness in our region. We have given training in Hydrographic Survey Support and Maritime Security to many countries. India's role in the Indian Ocean has been as a Net Security Provider.

Fourth principle: We have to preserve the maritime environment and maritime resources. As we know, the oceans have a direct impact on the climate. And therefore, we have to keep our maritime environment free from pollution like plastics and oil spills. And take joint steps against over-fishing and marine poaching.

At the same time, we should also increase cooperation in ocean science. India has launched an ambitious "Deep Ocean Mission". We have also taken several initiatives to promote sustainable fishing.

Fifth Principle: We should encourage responsible maritime connectivity. It is clear that the creation of infrastructure is necessary to increase maritime trade. But, the fiscal sustainability and absorption capacity of the countries have to be kept in mind in the development of such infrastructure projects. For this we should make proper global norms and standards.