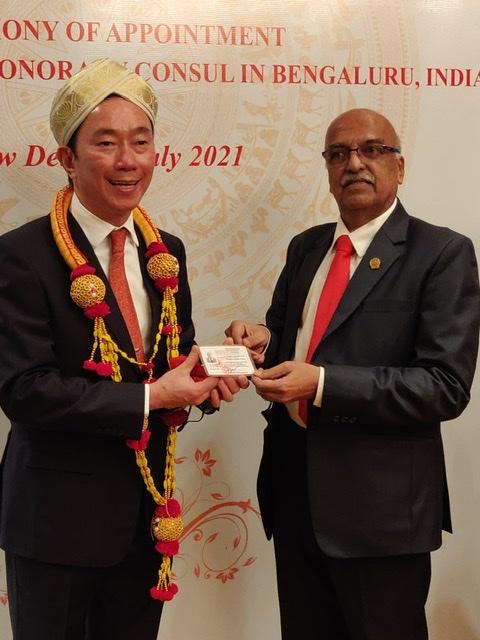 With this appointment, Murthy becomes the first ever Honorary Consul, for any state in India and only 19th the world over.

His role will be to provide consular protection of the State’s interests and lawful rights and interests of Vietnamese citizens in Bengaluru. He will also be promoting Vietnamese investments, Trade and Tourism within Bengaluru.

Speaking at the occasion Pham Sanh Chau said “It is a momentous occasion, and shows that Vietnam is interested in taking its relations with India to a higher level. The appointment of an honorary consul is not easy and is a very tedious process. It is validated through various departments in Vietnam. Honorary Consul’s are appointed by our Minister of Foreign Affairs for a period of 3 (three) years. We have nominated four other honorary consul’s for different states but Mr Murthy is the only one to be approved as yet”

With over 5 decades of experience, and a resident of Bangaluru, industrialist N S Srinavasa Murthy is the CEO of reputed Incense Stick Manufacturers, N K  Subbiah Shetty & Sons.

N S Srinavasa Murthy said “Vietnam is gaining its prominence as an Asian power both in terms of Economic and business capacities. I am honoured to be the first Indian to receive the role as the Honorary Consul for Bengaluru and will do all within my power to take care of Vietnamese citizens in Bengaluru. I will also promote Economic & Trade investment between the region and Vietnam as well seek tourism opportunities for the country”.

Murthy holds a bachelor in Science from National College, Bengaluru.