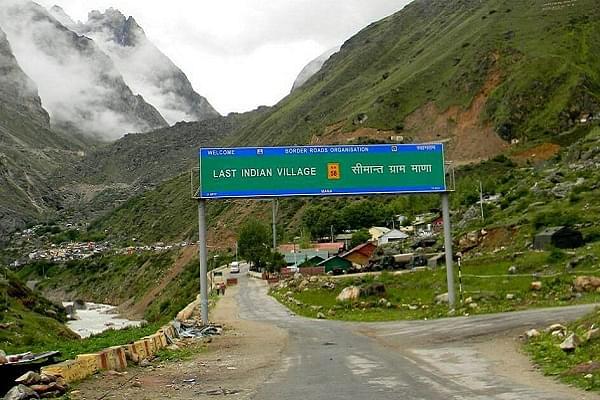 An Indian village right on the India-Tibet LAC in Uttarakhand.

The LAC is divided into the western (Ladakh), middle (Himachal Pradesh and Uttarakhand), and eastern (Sikkim and Arunachal Pradesh) sectors.  Majority of the transgressions in the last five years have happened in the western sector, while there has been an increase in the number of transgressions in the eastern and middle sectors as well. In 2019, there were over 660 ground violations and 108 aerial violations of the LAC, 326 in 2018, 426 in 2017, and 273 in 2016.

The Barahoti plains, with an average altitude of 14,000 feet above the mean sea level (MSL), are known for its grazing grounds spread over an area of approximately 40 square kilometres. The topography of the region is like a bowl, which is surrounded by high dominating features ranging from 16,000 to 18,000 feet above the MSL along the northern borders with China. The area is relatively open, undulating, and devoid of cover. The gradient of the mountain features generally slopes from the northwest towards the southeast direction. All nalas (small streams) and rivulets flow in the same direction and join the Hotigad tributary, which drains into the Bhagirathi through the Dhauli Ganga river. 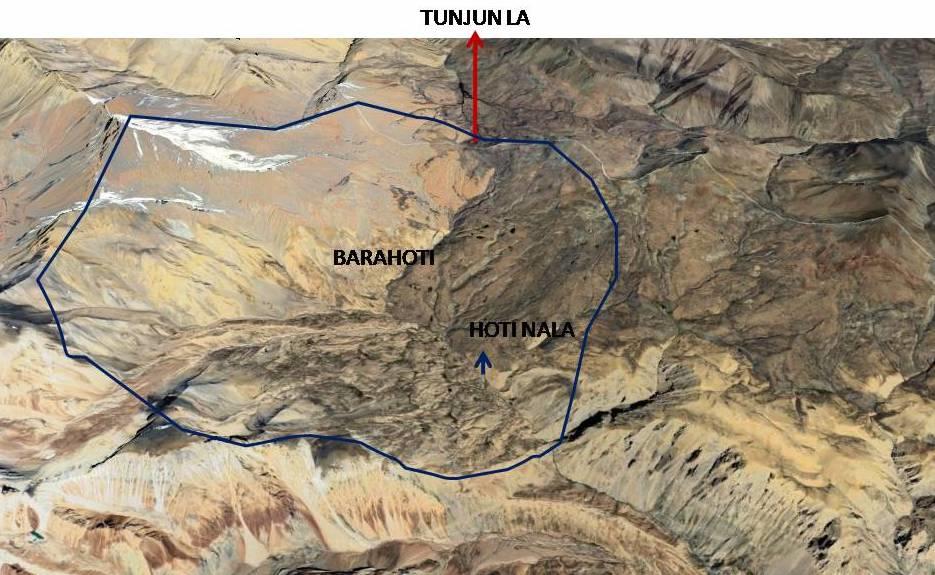 A sketch of the Barahoti sector in Uttarakhand.

Hotigad is a major water obstacle in the area during the monsoons and divides the Barahoti plains into two parts which is connected by a motorable road from Raiwala through Rudraprayag, Joshimath, Malari, Sumna up to Rimkim, the road head is about 8 kilometres from the LAC. Barahoti has traditionally been a camping ground for traders going to different trading centres of Tibet, like Gyanima Mandi, Gartok Mandi, etc, from the Chamoli district of Garhwal. While this was not actually a trading centre but more of a transit point for traders crossing over to Tibet, there were a few instances when a trade-mart was established there due to a breakout of an epidemic among the livestock in the markets of Tibet in 1866-1867. Thus, it was used only as an alternative to Tibetans (not Chinese) at a time when close ties existed between the people of India and sovereign Tibet. Traditionally, the locals who graze their livestock in this area knew this area as the Hoti plains. A temple near a natural spring in Barahoti, named Parvati Kund, is considered as a holy place by the local graziers. The same was demolished by PLA patrol in the recent past, although there have been reports of the locals rebuilding it subsequently.

India’s troop density, comprising the Army and the Indo-Tibetan Border Police, along the entire LAC in general and Barahoti in particular, have been beefed up in recent years. It can respond to any contingency on an escalatory matrix much faster than the larger PLA despite terrain frictions and other unfavourable factors.  In the backdrop of the face-offs/stand-off at Depsang (2013), Chumar (2014), Demchock (2014-15), Burtse (2015),  Doklam (2017), and Galwan (2020), one of the reasons for the increased number of troops in the transgressing PLA patrol was  to prevent any surprise, or avoid being overwhelmed by Indian troops in case there was a flare-up, as the Indian Army and the ITBP are located all along and close to the LAC in the region. There is another major factor behind this. In contrast to the Indian forces’ positions, the PLA’s base from the LAC in the Barahoti area is 30 kilometres on their side of the LAC. In case of a flare-up, they would have taken time to respond.

As such, an intrusion into the Barahoti bowl is undertaken through a motorable road running from Tibet to Tunjun-la, along the LAC, by vehicles and further to south towards the Indian side of the pass with ponies/yaks, which that takes almost about an hour of ride up to the Barahoti nala.

The PLA’s recent transgression in large numbers in its attempt to show an aggressive posture vis-à-vis India in the Barahoti sector, especially in the wake of the Ladakh stand-off, actually exposes it being defensive.

As the August 21 transgression by the PLA  armed patrol in the Barahoti sector was  in violation of 1958 agreement besides being unprecedented  and against the principles of “change of status quo” as per the 1993, 1996, 2005, and 2013 border agreements between India and China, it is recommended that the issue be raised as a strong protest, if not done so far by the way of established border-resolution mechanisms of flag/border personnel meetings between the two countries to prevent its recurrence in future.

While India continues to make efforts to reach a border agreement with China amicably, it must be willing to militarily confront the PLA should another Galwan valley-like situation arise. It must show its willingness to use firearms and not resort to mediaeval methods of fighting hand to hand with the enemy with clubs and stones. And this should be the new doctrine along the entire LAC. After all, despite being a stronger country, China doesn’t hold all the aces along the border with India, and as the recent way they transgressed in Barahoti shows.