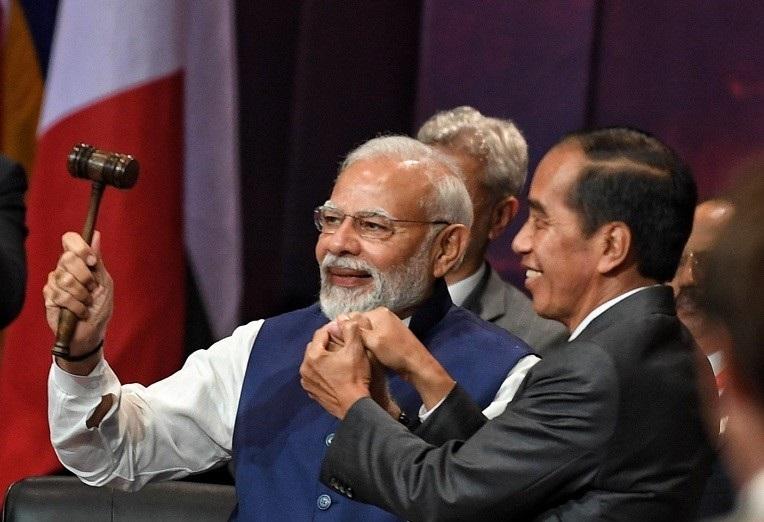 Indonesia hands over G20 Presidency to India in Bali

New Delhi: As the G20 2022 Bali summit came to an end on November 16, Indonesia has delivered the presidency baton of the G20 to India for the next year.

However, New Delhi will officially assume the charge from December 1 this year.

After taking over the baton, Prime Minister Narendra Modi stated "It's a matter of pride for every citizen in India".

At the closing ceremony of the Bali Summit on Wednesday, the prime minister said: "In the next one year, it will be our endeavour that G20 works as a global prime mover to give impetus to collective action...Together we will make G20 a catalyst for global change.”

India will assume the G-20 Presidency for the coming year. Our agenda will be inclusive, ambitious, decisive and action-oriented. We will work to realise all aspects of our vision of ‘One Earth, One Family, One Future.’ pic.twitter.com/fRFFcDqpzO

What will be India's focus?

After taking over the presidency, India will host about 200 G20 meetings in several cities across the country for one year.

The conversations are likely to focus on inclusive, equitable and sustainable growth; LiFE (Lifestyle for Environment), women empowerment, digital public infrastructure and tech-enabled development in areas ranging from health and agriculture.

Women-led development will be a priority in the G20 agenda, Modi said.

The principle of "data for development" will be an integral part of the overall theme of India's upcoming G-20 Presidency.

Health emergencies prevention, preparedness, and response; strengthen cooperation in the pharmaceutical sector and digital health innovation will also be discussed.

The theme of India's G20 Presidency is “Vasudhaiva Kutumbakam” or “One Earth One Family One Future”.

"The theme affirms the value of all life – human, animal, plant, and microorganisms – and their interconnectedness on the planet Earth and in the wider universe," the government said.

The G20 Logo draws inspiration from the colours of India’s national flag – saffron, white and green, and blue.

It juxtaposes planet Earth with the lotus, India’s national flower that reflects growth amid challenges.

The Earth reflects India’s pro-planet approach to life, one in perfect harmony with nature. Below the G20 logo is “Bharat”, written in the Devanagari script.

The G20 is a forum of the world's major developed and developing economies. It comprises Argentina, Australia, Brazil, Canada, China, France, Germany, India, Indonesia, Italy, Japan, the Republic of Korea, Mexico, Russia, Saudi Arabia, South Africa, Turkey, the UK, the US, and the European Union (EU).

Together, they account for over 80 per cent of the global GDP, 75 per cent of international trade and two-thirds of the world population