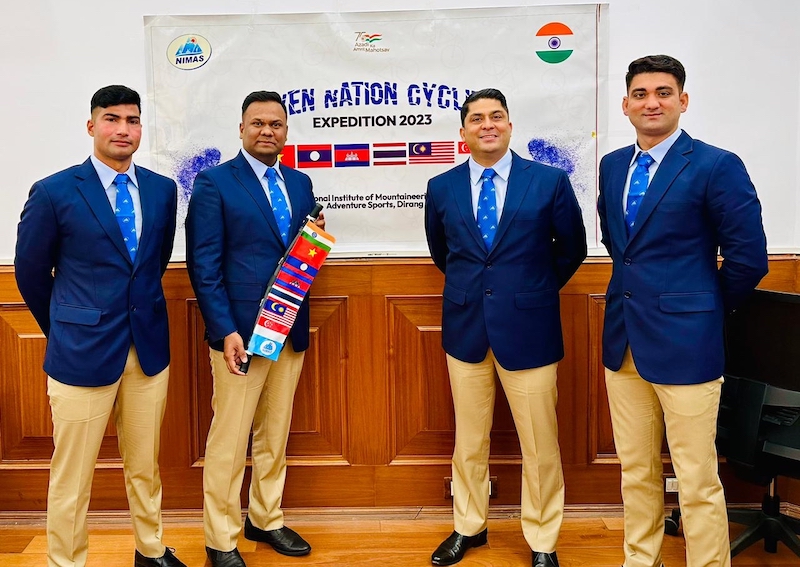 New Delhi: To commemorate “Aazadi Ka Amrit Mahotsav”, a four-member team of the Dirang-based National Institute of Mountaineering and Adventure Sports (NIMAS) is ready to kick off a six-nation cycling expedition from Hanoi, Vietnam, on Wednesday. The expedition will cover around 5,300 kilometres in over 50 days through Vietnam, Laos, Cambodia, Thailand, and Malaysia before culminating at the Esplanade Park Indian National Army War Memorial in Singapore, on March 8.

The four-member team is led by Colonel Ranveer Singh Jamwal.

The defence minister, Rajnath Singh, had approved the expedition in the meeting of the NIMAS’s executive council, which was held under his chairmanship last year, on April 18.

This is a first-of-its-kind cycling expedition that will traverse six Southeast Asian countries. In Singapore, they will pay tributes to all the warriors who laid down their lives for the country’s independence from the British Raj, at the INA War Memorial.

The “Azadi Ka Amrit Mahotsav” is an initiative of the Indian government to celebrate and commemorate 75 years of independence and the glorious history of its people, culture, and achievements.

It may be noted that a NIMAS team had created a record in India Book of Records recently by becoming the first-of-its-kind expedition that covered all the seven northeastern states by cycle. It also climbed the highest point of all the seven states in the region. That expedition had cycled 1,098 kilometres through Arunachal Pradesh, Assam, Meghalaya, Manipur, Nagaland, Mizoram, and Tripura and interacted with the youth associations of these states.