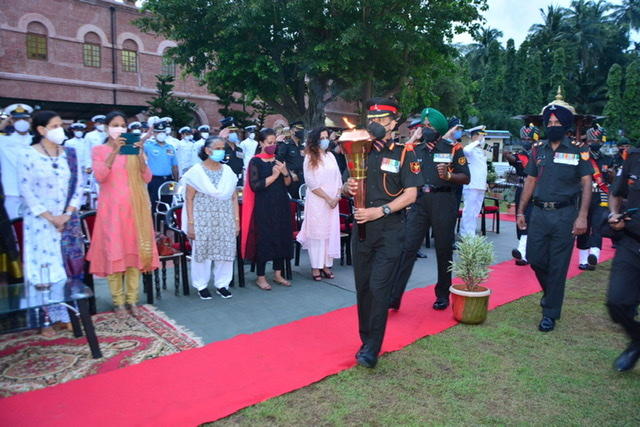 Andaman: The Swarnim Vijay Varsh Victory Flame was taken to Cellular Jail at Port Blair in Andaman & Nicobar Islands to mark the 50th anniversary celebrations of India’s victory in the 1971 war.

The Andaman & Nicobar Command (ANC) organised various events at the Cellular Jail. The events included a band display from the troops of joint services; a light and sound show and a short movie on the 1971 war.

The Army Component Commander collected soil from the Cellular Jail as part of the national initiative of soil collection from various parts of the motherland.

The Cellular Jail proudly stands as a symbol of India’s freedom struggle. Also known as Kālā Pānī, the jail was used to exile political prisoners to the remote archipelago.

Many notable freedom fighters including Vinayak Damodar Savarkar, Batukeshwar Dutt, Yogendra Shukla and V.O. Chidambaram Pillai, were imprisoned there during the freedom struggle.

Today, the Cellular Jail serves as a national monument.