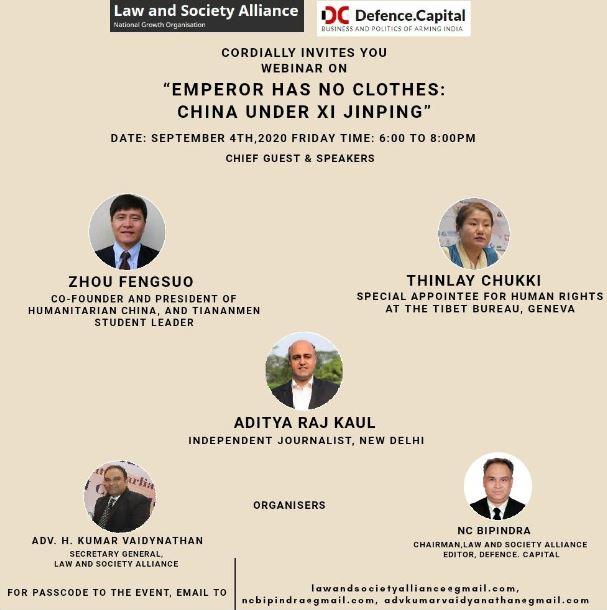 New Delhi: Communist Party of China’s Xi Jinping is a major threat to global peace and the world needs to follow India in fighting his expansionism, an exiled Chinese student leader who had led the 1989 Tiananmen Square protest has said.

Zhou Fengsuo, the President of Humanitarian China, also compared Xi with Nazi Party’s Hitler, and pointed out that the characteristics of the two leaders are remarkably similar.

“I applaud India for banning all the Chinese apps. It is important to counter China at every step. There is no way out. Other countries should follow Indian footsteps in fighting the Communist Party of China under Xi Jinping,” Zhou, who is currently in exile in the United States, said.

Speaking at a webinar “Emperor has no Clothes: China under Xi Jinping” organised by the New Delhi-headquartered Law and Society Alliance and Defence.Capital, Zhou said, “Chinese Communist Party under Xi is a threat to the entire world and every nation must realise China’s human rights violations perpetrated on Chinese citizen and on those in Tibet, East Turkestan and Inner Mongolia.”

“The 1989 Tiananmen Square protest should have woken up the world to the tragedy of allowing the Chinese Communist Party to continue in power, a regime that uses battle tanks and guns on its own people. Shouldn’t the world have understood how a regime that is brutally killing its own people will be a threat to the entire world later?” he asked.

“The totalitarian regime of Communist China has become unmatched in human history. Now I see a commonality between Xi's China and Hitler's Germany. To me, it is very alarming. We should fight it all the time and on all the fronts. To me a strong administration like India’s that has taken strong steps is laudable,” he said.

Throwing light on the atrocities committed on the Tibetans by Communist Party of China, Thinlay Chukki, Special Appointee for Human Rights at the Geneva-based The Tibet Bureau, said since 1949, the CCP has massacred 1.2 million Tibetans and destroyed more than 6,000 monasteries in Tibet.

“There are numerous programmes to forcibly Sinicize the Tibetans. They have systematically destroyed every element of Tibetan heritage and culture. Tibet, which was called Shangri La at one point of time, has been entirely destroyed by the CCP.”

Enforced disappearances are not new to Tibet and Tibetans, Chukki said, noting that the 11th Panchen Lama was kidnapped along with his family when he was just six years old and it is now nearly 20 years since that kidnapping.

“China has categorically refused to release the Panchen Lama and in his place, China has appointed its own Panchen Lama, whose family forms part of the CCP cadre.”

Chukki said those Tibetans, who continue to venerate the Dalai Lama, get detained, disappear mysteriously, and are found in detention camps, or never found at all.

“Tibetans are subjected to violence and torture. More than 154 Tibetans have self-immolated themselves. Their only expectation was to urge the international community to fight China and give the Tibetans their due right.”

On CCP’s programmes for rapid demographic change in Tibet, she said, a very recent report had pointed to the Tibetan population in Tibet coming down to just six million whereas the Chinese population going up to 10 million.

“If you look at urban areas, there are 10 Chinese for every one Tibetan in Tibet today. Every policy executed by Xi Jinping is aimed at the sole objective of the ensuring Sinicization of Tibetans, so they lose their unique identity and culture.”

Aditya Raj Kaul, an independent journalist, said Communist Party of China under Xi has a game plan, which includes domination of every global institution in the emerging new world order.

He said the expansionist tendencies of Xi is reflective of the hegemonistic mindset of Communist China, which has triggered the current conflict with India in Ladakh.

“India has already begun to effectively counter China at every step of the way, be it military or geopolitics. China has been the big elephant in the room for long for India and now India has woken up to the challenge.”