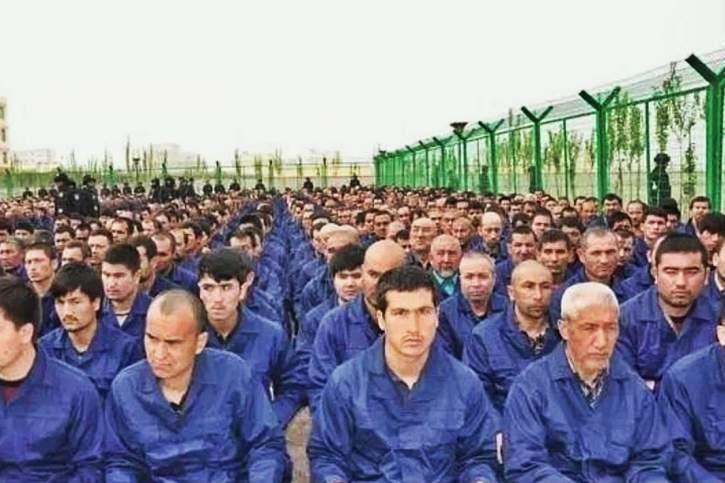 Detainees listening to speeches in a Xinjiang concentration camp.

People have often compared China’s handling of the Uighurs to the Nazi handling of the Jewish population. People being targeted for their identity is nothing new, in fact it would be as old as human history. The Uighur conflict is the conflict of identity.

Xinjiang is the largest province in China where the population in the not-so-distant past was dominated by the Uighur ethnic group. The Uighurs are mostly Muslim and the language they speak is not Mandarin but is related to Turkish. Naturally they feel they are culturally closer to maybe Central Asia than China. It would have remained that way if the development of the area hadn’t brought on waves of migration to this region. A census of the region conducted in 2000 revealed that Xinjiang now had a 40 per cent Han Chinese population.

The Chinese state officially recognizes the rights of the Uighurs as equal citizens of the communist nation, but reality on the ground is starkly different.

The fact is that this region is a new addition to the nation of China. Its Mandarin name literally means “the new frontier”. It was made a part of China during the rule of the Quints in the 19th century. During the Chinese civil war, the region declared its independence. However, the communists took over the erstwhile East Turkestan soon after that. Since then, Beijing has kept tight control of the oil rich region and drafted specific settlement policies to change the demographics of the region.

The Hanification, as it is called, of Xinjiang was a strategic move by the Chinese government and at the heart of the move is the conflict of identity between the Uighurs and the Han Chinese.

China has come under extreme pressure due to its conduct in the region. Several stories of mass incarceration and forced labour camps have come out in the last several years. In March 2020, a report emerged that thousands of Uighur prisoners were moved to work under extreme conditions at the factory suppliers of some of the biggest brands in the world. The Australian Strategic Policy Institute report stated the dire circumstances Uighurs find themselves in. Between 2017 and 2019, the ASPI thinktank estimates that more than 80,000 Uighurs were transferred out of the far-western Xinjiang Autonomous Region to work in factories across China. It said some were sent directly from detention camps. All this was done under an aid program of the central government known as “Xinjiang Aid”.

Thousands of people languish in concentration camps-like large prison-cum-labour complexes, which Beijing calls “re-education” camps, for trivial or non-criminal reason. Leaked records show that they are detained for simply practicing their culture. Adrian Zenz, senior fellow in China studies at the Victims of Communism Memorial Foundation, in Washington DC, said the records showed that Beijing was detaining Uighur citizens for actions that in many cases did not “remotely resemble a crime”. The Chinese government maintains that those are not prison camps, but educational camps used in “weeding out extremism”.

Frequent reports from the region point out that China is trying to suppress a culture. Forced cutting of beards and forbidding prayers is an everyday occurrence. Reports have also come out stating that the government is razing the places of worship for Uighurs and other ethnic minorities and constructing public toilets on them.

This doesn’t stop here. Apart from mass-incarcerating ethnic Uighur Muslims, destroying their culture, heritage and way of life, Beijing has also embarked upon a campaign of “polluting” ethnicity by sending Han Chinese men to sleep with Uighur women.

In late 2019, reports emerged in various western media outlets that Han Chinese men had been assigned to monitor the homes of Uighur women whose husbands had been detained in prison camps. In the so-called part of the “Pair Up and Become Family” programme, Han Chinese men stay with and sleep in the same beds as Uighur women.

The western media billed it as “state-sponsored mass rape” of Uighurs.

An anonymous Chinese official, in an interview with Radio Free Asia, confirmed the existence of such a programme, but denied that there was anything sinister about it. The Chinese government didn’t deny it either. On the contrary, they said the programme was for “promoting ethnic unity”.

Not just the Uighurs, other Muslim ethnic groups, such as the ethnic Kazakhs and Uzbeks, have been detained since April 2017 and being treated just like the Uighurs are being treated.

It is said that the government fears the growth of Islamic extremism. However, it seems to be the case of realizing one China dream and establishing Han Chinese superiority. What Beijing has embarked upon against the Uighurs and other Muslim ethnic groups fits the classic definition of “cultural genocide”.

The world is silent on possibly the greatest ethnic genocide since the Nazi Germany. What’s even more horrific is the silence of the “ummah” or the Muslim world. The Islamic Republic of Pakistan, China’s client state, consciously decided to turn a blind eye on the persecution of the Uighurs just across its northern borders, while crying hoarse over the Kashmir. In January this year, during an interview with Foreign Policy magazine, the Pakistani prime minister, Imran Khan, said he has been silent on the repression of Uighur Muslims because China has “helped” Pakistan.

The oil-rich Arab states, such as Saudi Arabia, too has refused to say a word on the issue. Instead, the crown prince and de facto ruler of Saudi Arabia, Mohammed bin Salman, said China had the right to put the Uighurs in concentration camps.

Although the United States has recently taken some measures against China to pressurize Beijing for its persecution of the Uighurs, it is seen as too little too late. China, with its deep pockets and its place in the global supply chain, has placed itself in a place where prominent nations have become mute spectators in the ongoing ethnic persecution and the destruction of a culture in fear of hurting business.

With its debt-trap diplomacy, Beijing has virtually bought the silence of the world. If the world fails to rise up now for the Uighurs and other persecuted ethnic groups in China and force China to review its genocidal policies against them, history would record the mute spectators as cowards who sold their soul to the dragon.