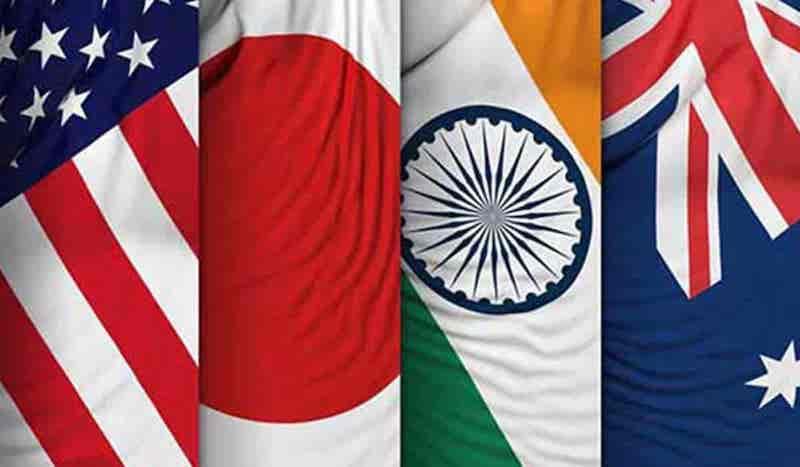 The flags (L to R) of the US, Japan, India and Australia – the four members of the Quad.

There is doubt among certain sections regarding the relevance of the quasi-security alliance between the United States, India, Japan and Australia, which is known as the Quadrilateral Security Dialogue or the “Quad”. The Quad’s primary aim is to keep the Asia-Pacific a conflict-free maritime zone and the right to navigate freely in international waters. Doubts are whether this alliance is to restrict China or challenge it.

The sceptics, however, ignore the logical view that the Quad is not a purely military alliance, like the North Atlantic Treaty Organization (Nato). It has evolved with a strategic vision with the aspirations of democratic nations who are stakeholders in the region. It seeks to restrict China’s design to sabotage the peace and friendly ties between nations in the region in its effort to impose its neo-imperial hegemony. If we see, the Quad has never tried to escalate tensions in the region and its stand regarding China is for safeguarding the interests of the nations in the region. There may be a naval collaboration between the member states, but the basis of it has always been bringing democratic nations under a single umbrella. If such developments are perceived against the interests of any nation, one should stand before the mirror.

The above explanation is relevant considering China’s overtone against the Quad. In fact, the way China has been propagating against it is insensible and against diplomatic doctrine. This is what China’s recent approach in Bangladesh reflects.

China tried to prove its dominance over Bangladesh through an illogical approach that may be perceived as a new form of “wolf warrior” diplomacy, which is the aggressive diplomacy adopted by Chinese diplomats under Chinese President Xi Jinping to maximize strategic outreach with an authoritative stance in the periphery and beyond.

The Chinese ambassador to Bangladesh, Li Jiming, warned Bangladesh that bilateral relations between Beijing and Dhaka would take a hit if Bangladesh joined the Quad. Significantly, this did not scare Prime Minister Sheikh Hasina’s government. This surprised Bangladesh’s strategic and diplomatic analysts. China was embarrassed by the way Bangladesh reacted. AK Abdul Momen, Bangladesh’s foreign minister, reminded Beijing about Dhaka’s legitimate right to frame, formulate and follow its indigenous foreign, diplomatic and strategic policies as a sovereign nation. In other words, Bangladesh told China that it must not cross its limit and refrain from interfering in Bangladesh’s sovereign decisions. This incident also showed that Dhaka is matured enough to balance its diplomatic relationships with different nations and its stand against China hegemony. For now, Dhaka has silenced Beijing.

The whole episode bears great strategic implications for the Quad, Bangladesh, and China. The fact is: the Quad has evolved as a potential strategic block – and China acknowledges this. The hype over China’s so-called wolf-warrior diplomacy reflects Beijing’s increasing concerns. It is facing roadblocks in the vast Indian Ocean Region (IOR), especially in countries close to the strategic Malacca Strait. In fact, China is gradually realizing that its policy of building strategic bases in economically weak nations is no longer delivering. China has invested a lot in Bangladesh as well. But this is also true that China has failed to purchase Bangladesh. Recent developments in Bangladesh answer those who perceive Bangladesh as a Chinese colony.

It is expected that China will face similar situations elsewhere if it continues with its bullying tactics and tries to interfere in the policymaking of other nations. History is witness to the fact that the United States has bitten dust following this policy earlier. In fact, considering every nation with the parameter of Pakistan is utterly wrong. China has a lot at stake in Pakistan. China believes Pakistan can provide China accessibility to alternative routes, the China-Pakistan Economic Corridor (CPEC), port facilities in Karachi and facilitate its reach to Iran’s Bandar Abbas, thus evolving as a stakeholder in Afghan affairs and improving its ties with Teheran. However, China must not ignore the fact that Iran is not only anti-US but anti-imperialism as well. Teheran’s commitment to democracy is unquestionable. Naturally, to make Iran fall in line with China’s wishes won’t be a cakewalk for Beijing and Islamabad.

Coming back to the incident in Bangladesh, we can clearly see that Dhaka is not ready to compromise its relations with New Delhi. Bangladesh has proved to be a valuable partner of India as a democratic country. This is true in the case of the South Asian Association for Regional Cooperation (Saarc). The possibility of fruitful relations between the Quad and the Saarc looks impressive. Some Saarc nations may eventually become Quad members or, at least, give it issue-based support. And India is the bridge between the Saarc and the Quad.

The possibility of the Quad expanding depends a lot on how Saarc members perceive the Quad. If in East Asia Japan is the most important country to convince more nations and bring them in the Quad boat, in Southeast Asia, India has that advantage. In fact, India has that strategic advantage despite Chinese economic imperialism in the subcontinent.

India’s geostrategic location makes Bangladesh, Nepal, and Bhutan dependent on New Delhi and this is unalterable. Similarly, India’s maritime diplomacy has renewed cooperation with Sri Lanka and the Maldives. No doubt, China has invested a lot in these countries. Present world is multipolar, and India has emerged as an important stakeholder. India must make efforts to convince other Saarc members that they should think afresh about the association with a strategic vision.

China’s growing concerns over the Quad gives India an opportunity. New Delhi must use this to gain more strategic ground as well as that of the Quad. The time has come for India to lead this mission.

The writer is an Assam-based strategic affairs analyst and author of two books – “India’s fragile foreign policy towards neighbouring nations” and “Modi’s rule and India’s unbound opportunities: Narrative of the substantives and beyond”.

Disclaimer: The views expressed in the article are the author’s own and not necessarily that of India Sentinels’.