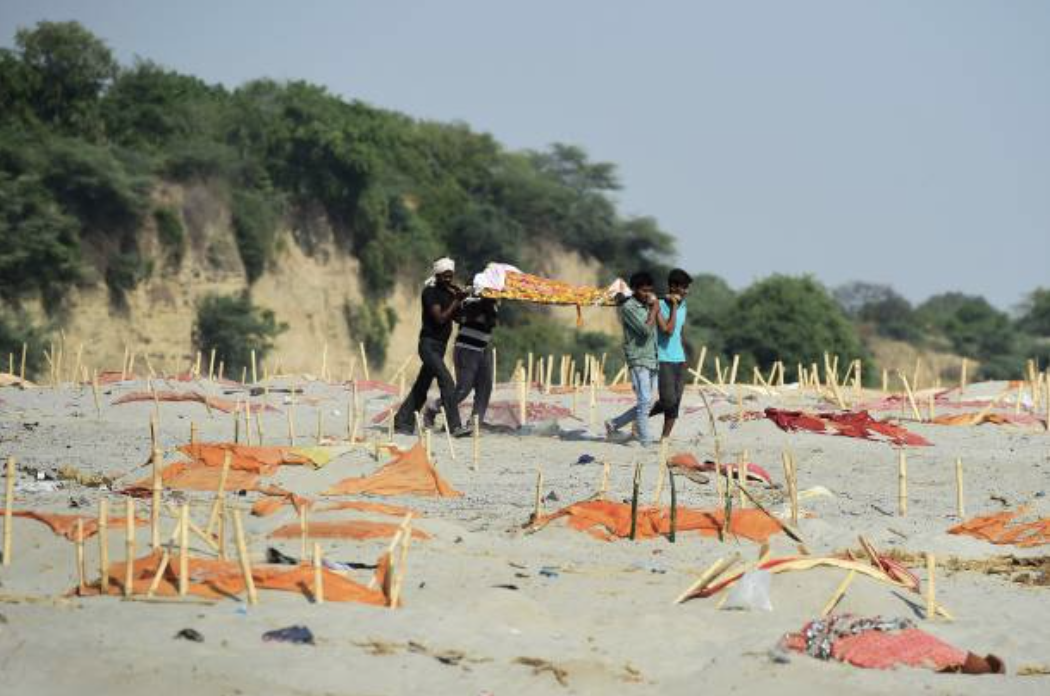 Men carry a corpse on the banks of Ganga where other bodies can be seen buried in shallow graves some 40km from Allahabad.

I could not but compliment the proactive steps some dynastic regimes have taken in the first half of 2020 in controlling the novel coronavirus menace by restricting their total infections and fatalities well within the manageable limits. For that matter, I am not a royalist, nor a sympathizer of monarchy. I take pride in being a staunch practitioner of democratic ideals for I hold the right to individual liberty and the gift of personal choice in high esteem on par with other virtues of life. I appreciate the manner some atheist nations have managed their economies on a positive growth note without disturbing the socioeconomic lives of their people, braving the current pandemic strategically and confidently. By the way, I believe in God. I was born in a family of the faithful and I still read holy texts and pray.

I was also impressed with how meticulously some autocratic governments have executed Covid prevention and mitigation measures to not let their people undergo the pains of viral disaster. Let me confess at the same time that I was never convinced that strict disciplinarian tactics in administration would as a rule yield positive results though I served as an active member of a regimental setup like police force for more than three decades. Why I refer to these paradoxical explications is that political fidelities, dogmatic allegiances, traditional practices etc do ultimately help achieve better living conditions only as a stopgap means, albeit some work to some extent, not wholly and some don’t but going on the other way round by prioritizing unproven ideologies over the realities of precious lives will plausibly be suicidal and certainly a big mistake.

Human life is sacrosanct. Facilitating the citizens to live in a safe and congenial socioeconomic-political environment is the duty of every national government which in turn is as sacrosanct as its legitimate responsibility. But it is immaterial whether the form of the government is a popularly elected representational establishment or a hereditary monarchical reign as long as the people continue enjoying their lives freely and fearlessly. The so-called authoritarian states where the kings were powerful like the noble Ashoka, or the enlightened Solomon and their subjects were happy could be rated as more benevolent than the namesake democratic republics where their leaders behaved like the insensitive Trump or the reckless Brazil’s Jair Bolsonaro as the citizens are constantly apprehensive about security of their lives. Thanks to the Bard of Avon, a rose by any other name would smell as sweet. Good governance by any jargon would serve as beneficial.

I will be failing as a citizen if I, as an anti-totalitarian, remain unconcerned by apathy and indifference on the part of any democratic authority during the continuing existential crisis of deadly contagion. I will also not be doing justice as a liberal if I don’t acknowledge the prompt humanitarian response, any dictatorial system elicits to tackle the pandemic timely. At least in times of ongoing health emergency, people will have to embrace the spirit of their natural essence of being human rather than rigidly sticking to artificial identities like nationalities, creeds, castes etc. Yesterday’s Indian is today’s American, and today’s Baptist could be tomorrow’s Buddhist. But their humanness will be intact even on lunar surface.

Most of the crises anywhere in the world are controllable provided there are coordinated efforts by the command structures of governments in right direction. If there is absence of synergy, havoc will surge hitting the people in panic especially in a period like the present medical misfortune.

When Covid broke out in the US sometime in January 2020; it was its President Donald Trump who repeatedly downplayed the clear threats of infection spree. However, his top medical advisor Anthony Fauci, who stuck to scientific evidence, data points and clinical process, was straightforward in alerting the people that their government was negligent in its duties to deal with the catastrophe. Such clashes which arise at times between the political leadership and the bureaucratic apparatus will leave the people at large to suffer insurmountably. If they both respect each other’s wisdom and make themselves bound by objective considerations and shared responsibilities in larger interests, prospective unfortunate eventualities such as the current unending covid woes would not have ensued.

While delineating the standing of bureaucrats under the political governance, the first-ever British head of Home Civil Service, Sir Warren Fisher, stressed way back in 1930s that the “determination of the policy is the function of the minister and once policy is determined, it is the unquestioned and unquestionable business of the civil servant to strive to carry out the policy precisely with the same energy and precisely with the same goodwill whether he agrees with it or not.” Being in such a subordinate footing to the minister who is the political master, a civil servant is after all constrained to toe the line as desired and dictated by the former. On the other hand, as famously stated by the first deputy prime minister of India, Sardar Patel, civil service is only a steel frame. It clearly implies that there is something else on which the steel frame stands erected. It is understandable that political master is the steering nerve centre to run public affairs whereas the civil service is a poor supportive skeletal structure of the body.

There are ample instances to highlight the interdependent bond between political master and civil servant with regard to crucial requirement of joint intellect and concerted action. Conflicts if any, will invariably go calamitous. At least two of such common dissensions which tend to occur from time to time can be cited.

The first one is referred to as “Halder’s Predicament”. When Adolf Hitler, the supremo of German Nazi Party, expressed his intention to occupy Sudetenland, a German- majority part of Czechoslovakia, it had the potential to trigger off a larger European war that Germany wouldn’t have been able to win in 1938. General Ludwig Beck, the chief of the general staff of the German army, raised objections saying that Germany wasn’t ready for a war, and it would be disastrous.

Hitler liked Beck due to his professional competence and early help to the Nazis. But like most megalomaniacs with a sense of “mission”, he side-lined Beck in the German military command. Beck resigned. General Franz Halder was appointed as the next chief of the general staff. He was a weak and opportunistic man with no strength of conviction. He had never seen combat but was an “intellectual” strategist. He admired Hitler when it was profitable to do so.

Later during the Polish campaign, he endorsed SS war crimes. However, he became squeamish when it appeared the western allies would overwhelm Germany with their numerical superiority. He plotted and dithered while history took its course. His is an example of professionals with weak moral fibre and flexible integrity. He plotted off and on against the Nazi regime but never took a stand when it mattered.

The second one is the “Cassandra Complex”, which points to overt or covert clash of opinions between the political boss and the civil servant. As chronicled in Greek mythology, the wise Cassandra was never taken into confidence by the King Priam whenever she warned of impending dangers. Consequently, the terrible Trojan war erupted which destroyed the whole of kingdom in due course.

Halder’s Predicament and Cassandra Complex are only indicative of many complex situations where the politically coloured executive decisions and the rule-bound bureaucratic roles often come in disagreement. It is here in the context of such administrative processes that the enabling part of political leadership becomes essential especially during the critical situations like the present covid scenario. Prevention of crisis and its effective mitigation lie among other things in transforming the Halders into the Faucis and making the King Priams sensitive to the prudent advice of the Cassandras.

Disclaimer: The views expressed in the article are the author’s own and not necessarily that of India Sentinels’