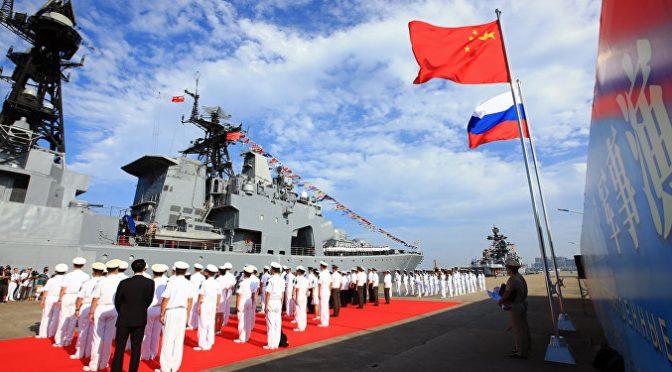 Russian and Chinese naval personnel during a joint maritime drill.

The Soviet Union’s competition with the United States defined global geopolitics for nearly half a century after World War II. However, with the end of the Cold War, in the early 1990’s, the world order entered a transition phase, which is arguably still in progress. Even in this period, despite premature claims of an America-led unipolar order Russia, continued to enjoy significant goodwill and influence across Asia and Africa.

In recent years, President Vladimir Putin’s policies have seen Russia weather hostile western sanctions, and sustain economic growth to re-emerge as a credible power on the global stage. This resurgence of Russia is based, to a significant extent, on the historical goodwill and bilateral bonhomie between Moscow and Asian capitals like Tehran, Hanoi, Dhaka, Colombo and New Delhi. These countries have continued to expand their economic, energy and trade relations with Russia, notwithstanding the pressure from third parties to limit such engagement. Such an outlook was made possible by the commonality of vision shared by these parties. Russia had long supported the collective quest for Asian countries to establish a truly multi-polar, multilateral world order. This has been repeatedly emphasised by Putin, as well as leaders of these countries, in recent times.

However, the actions of the Russian navy in the Indian Ocean Region, seem to be at odds with Moscow’s vision. Over the last couple of years, the Russian navy has facilitated the participation of China’s People Liberation Army – Navy (PLAN) in multiple maritime exercises across the IOR. These include the Exercise Mosi with the South African navy and Exercise Marine Security Belt with the Iranian navy, both in 2019. Recently, reports of another exercise, named CHIRU, to be conducted in the Persian Gulf in 2021-22, have surfaced.

At first glance, these exercises may seem to be mere expressions of the Russia-China partnership, which has indeed grown in strength over the years. However, this estimate would be both superficial and myopic. It would be in Moscow’s interest to critically re-assess the implications of these actions, given the dominant trends in current global geopolitics.

Firstly, it must be understood that unlike the Russia-China joint sea exercises, which contribute to joint training and operational experience, these “multilateral” exercises have no significant training value. They are solely used as geopolitical statements, aimed mainly at the US, to challenge the latter’s claim of maritime pre-eminence. The question, however, which begs to be asked is: “Who is sending this signal?”

The Chinese Communist Party has already established itself as the “leading partner” in any such multilateral effort, by dint of their economic and political superiority. Concomitantly, China’s president, Xi Jinping, and his party men have been able to make these exercises a means to communicate the CCP’s message to the world. This message is: “China is now a leading global power and the CCP’s military can operate even across the oceans …”

Clearly, this message has no advantage for Russia. In fact, there is likely to be a two-fold impact on Moscow.

To begin with, the influence they enjoy in these regions will gradually shift to Beijing, as the evident “elder brother” in this dynamic. Additionally, Russia’s naval efforts will help China establish a “presence”, which it is unlikely to be able to achieve by itself. For the Russian navy, this would eventually mean that they would play second fiddle to the PLAN, which is presently hanging by their coattails, till they learn the ropes.

Secondly, Moscow must consider the second order effects of such multilateral exercises and efforts. China’s ambition does not cater for any multipolar or multilateral global governance framework. Xi unwaveringly believes that only after all nations accept his ideology, as explained in the ever-growing “Xi Jinping Thoughts” binder, will the CCP have achieved its mandate. Accordingly, the CCP seeks to establish a hierarchical world order, where initially apex power is shared between US and China, and subsequently, China ascends unchallenged to the top.

How would the interests of either Moscow or any of the Asian countries be entertained in this calculus? Simply put, they would not! Beijing’s veneer of friendship lasts only as long as their goals are being met. Recent developments in Australia and Lithuania have laid bare the CCP’s single-minded devotion to their own cause, even at the expense of those they have termed as friends and partners. Once the PLA has acquired the requisite professional experience, it would no longer seek Russian participation in their activities in the IOR. Russian technological firms have already learnt this lesson, the hard way. Moscow would do well to realize, that in the near future, it may well find itself as the outsider in regional relationships it had long cherished. As the Dragon grows in strength, and seeks to dominate, what will happen to the Bear?

Thirdly, partnering with the CCP is a two-edged sword, particularly in the IOR. A substantial percentage of illegal maritime activity in the region, such as illegal, unreported, and unregulated (IUU)  fishing including unsustainable poaching and exclusive economic zone violations, and illegal marine scientific research is being conducted by Chinese actors. The tacit support being provided to these activities by the CCP has also been widely reported upon, and flagged by multiple governments as a cause for concern. Thus, associating with the PLAN in the IOR to promote maritime security, while illegal Chinese entities constitute one of the biggest threats thereof, could end up being counterproductive for the Russian navy.

Lastly, by helping the PLAN establish presence in the IOR, the Russian navy is inadvertently worsening the volatility of the region. China’s growing naval presence in these waters, while temporary at present, will inevitably lead to establishment of a larger permanent Chinese presence in the Indian Ocean. This would not only deepen the great power competition in the region, it would also force regional nations to “choose sides” – something countries across the region have been loath to do over the last seven and a half decades. This would, in essence, sound the death knell, for any hope of establishing a truly multilateral world order.

Moscow, even after the fall of the Soviet Union, has been viewed favourably across Asia. Historical allegiances, complemented by a shared worldview, have allowed Russian relations with most major Asian nations to grow stronger, broader and more resilient. However, the recent change in the Russian navy’s engagements with China, particularly in regions where the latter’s presence threatens regional stability, have the potential to impact Moscow’s interests adversely. It may be time for the Kremlin and the Russian navy to reassess whether this dance with the CCP dragon, particularly in the Indian Ocean, is helping Moscow’s cause.