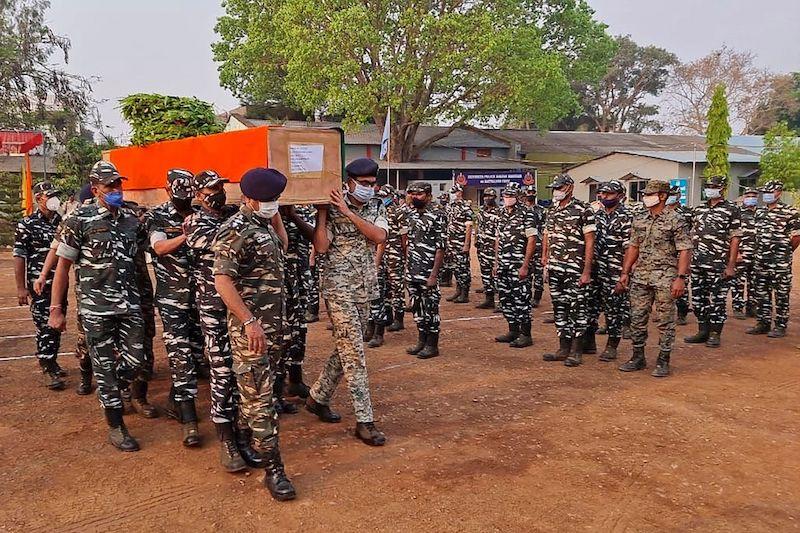 CRPF personnel carry the coffin of a fallen fellow soldier in the April 3, 2021 Maoist attack in Chhattisgarh.

Former Prime Minister Manmohan Singh, during his premiership, had once termed the Maoist (or Naxalite) insurgency the “biggest internal security threat” that India faces. Realizing that the grievances of the tribals of central India can be addressed only if the levels of violence are brought down within acceptable limits, the government deployed a large number of security forces in the Maoist-hit region.

However, the failure of the security forces to achieve this objective is a sad reflection on the competence of the leadership of these forces, who are overwhelmingly officers picked from the Indian Police Service. Inaptitude of the leadership is apparent from repeated large-scale losses suffered by the Central Reserve Police Force – the designated security force to assist civil administration in maintaining internal security.

The April 3 Maoist attack on the security forces, in which 22 soldiers lost their lives, should be a wakeup call for the establishment to carry out an overhaul of the management policy of central armed police forces or the CAPFs. The amateurism displayed by the leadership in planning and conduct of this operation is beyond imagination.

No rational leader will send out almost 2,000 soldiers on a jungle-bashing mission without any backup plan. How could they even imagine that such massive movement of troops will remain secret from the insurgents? Did they plan to secure the line of communication which was imperative especially at the time of withdrawal? The leadership has proved itself incapable of appreciating these aspects because they are not trained to think in this manner. Their training is restricted to matters of policing and investigations.

Had they visualized the likely reaction of insurgents, they would have ensured locating adequate reserves at appropriate places to tackle any contingency, like the one that presented itself on that fateful day. They would have ensured that at least the routes of withdrawal of troops were adequately secured.

The security forces, in spite of being deployed in this area for over a decade, are still unable to dominate large swathes of the so-called “liberated zone”. This does not speak well of the manner in which they have been operating.

The leadership, instead of ensuring gradual expansion of deployment and enhancing the area of influence of the security forces, has generally remained stuck around the periphery. This left vast tracts of the central Indian forests for the Naxalites to move around freely. It is a sad reflection of the defensive mindset of leaders that the security forces have not been able to penetrate deep into the area. Because of this factor, the initiative and moral ascendency continue to remain with the insurgents.

If the security forces had succeeded in extending their domination to the interiors, it would also have enabled the civil administration to reach remote places and bring the fruits of development to these areas and assuage the tribals. However, their repeated failures point towards the inability of the security forces’ leaders to draw relevant lessons from many insurgencies from the world over, like Vietnam, Sri Lanka, Malaysia, Congo, etc, as well as from their own previous setbacks.

What further reflects adversely on leadership are the reports of troops abandoning their comrades. It points to their disconnect with troops and, hence, the inability to inculcate a sense of camaraderie and regimentation among the troops.

Not conversant with the operational ethos of CAPFs, they have destroyed the regimentation – an extremely important attribute for any fighting force through an ill-conceived decade-old directive to rotate one third of troops of a unit every year in the CRPF, Indo-Tibetan Border Police, etc. This has resulted in the erosion of rapport between the commanders and their troops along with within the troops themselves. This has, thus, adversely affected the operational efficiency and morale of troops.

That the morale of these forces is low is apparent from the fact that almost 47,000 personnel of these forces have either resigned or gone on voluntary retirement during the five-year period from 2016 to 2020, according to a reply given in Rajya Sabha by the junior home minister, Nityanand Rai. Contrary to “personal reasons” the quitting soldiers officially listed, the actual causes vary from bleak career prospects, disparity in pay and perks, extended duty hours and difficult working conditions, including lack of accommodation and equipment, and prolonged separation from family.

A plethora of litigation relating to personnel matters in these forces also points towards inadequacy of the leaders in ensuring proper personnel management.

NC Asthana, a retired IPS officer, has aptly concluded in one of his pieces that the “bullets (that killed the soldiers) belonged to the Naxalites, but the “megalomania and incompetence of top officers” killed the jawans.

Nothing can be closer to the truth.

The CAPFs have an important role in India’s security matrix. It is imperative that the government urgently looks into the problems of these forces, especially the leadership reforms which have been plaguing them.