During a lecture on a topic from Indian mediaeval history, suddenly a crispy voice from the back benches drew the professor’s attention with an indomitable query: “I object, sir, to calling the rulers by their faith. We should address them as Mughals, just like the way we call the Britishers.” A pin-drop silence followed in the classroom. All heads turned towards the questioner, and I too looked back. Although I had sighted him a few times in the dining hall over lunches and dinners, I was not familiar with his name yet since we, the new recruits, joined the National Academy of Administration at Mussoorie only a fortnight earlier for our foundational course.

The professor’s face turned dim for a while, but he recovered immediately with a mystic grin and agreed: “OK, perhaps you may be correct. I take back my words. By the way, what is your name?” “Rishi Raj Singh,” came the reply from the tall and lanky fellow probationer with a twirling moustache. This was in September 1985. Over the years, the initials of his name – “RR” – became unanimously synonymous with the brand of the 1985 civil services batch.

A few months after the completion of our two-year training, we got placements and began settling in our respective state cadres. It was then that we started receiving carbon copies of RR’s “newsletter” showing who was posted where across the country.

Thus started the saga of our careerlong “RR Diaries”.

I strongly believe that even a staunch communist youth from Andhra Pradesh or Jharkhand could miss reading Che Guevara’s “Motorcycle Diaries” in his ideology-formation period, but none of us in the batch could afford to miss the “RR Diaries” as they were an indispensable part of our uniform kit for frequent reference to interact with our batchmates. RR would speak to at least one batchmate in every state to gather the posting details for compilation and onward distribution. If I may assert here, we would all have gone contactless during that non-digital era had the “RR Diaries” not been with us.

As my association with him grew over the following years of district assignments, I started referring to him fondly by a sobriquet, “Sher-e-Bikaner”, after his much-loved hometown in Rajasthan. By that, I simply meant “a good man from Bikaner” – because good people seem to have become rare in the contemporary world. Also, because a good man is more valorous than a lion to stand up for ethics and values. 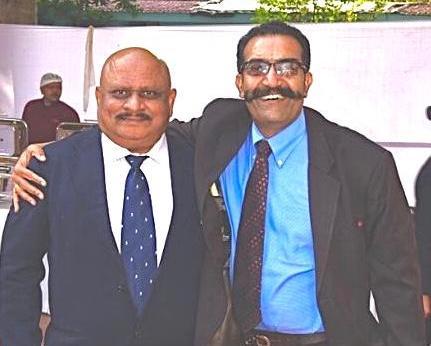 RR has always been profuse in hospitality. Besides taking care of his friends and guests, he also would feel concerned about one’s prospective comfort and convenience. He was a deputy commissioner of police at Thiruvananthapuram during the mid-1990s when I was on an official tour to Kerala. As I was about to leave his office for Kochi, he advised me to use the toilet. I declined. “You will certainly fail if you want to prove Naipaul who satirized India as the world capital of open toilets,” he quipped, and added, “It would take a minimum four hours, my dear Mari, from here.” I headed to the bathroom without a word.

While entering Ernakulam, I felt Naipaul probably missed visiting God’s own country before penning his travelogue.

Despite his regimental posture and appearance, he is a person of clean humour at heart. A few years ago, the media, especially print and social media, was abuzz with the echoes of defining 14-second stares at women, purportedly stated by him at a function. Later at one meeting, I asked him about the origins of the phrase for the sake of updating my knowledge. “You know better as a romantic poet,” he said, trying to be serious but could not hide his mysterious smile. I understood and felt amused at my own interpretation. What an esoteric mathematical connection between offensive gaze and Valentine’s Day!

RR is a man of compassion. One fine day, when I was down with jaundice, in 2015, he appeared unexpectedly by my bedside to inquire about my health – all the way from Thiruvananthapuram to Bhopal. What an unimaginable gesture of friendship! During the peak of the Covid-19 pandemic’s second wave, his “ever ready to help” attitude was highly evident in handling the hospital admissions of the dear ones of many of our batchmates. I too requested him to arrange for a bed for my Covid-stricken friend in Kochi and I saw positive action by evening the same day. A Good Samaritan indeed!

In his professional life, he has had an outstanding career as an Indian Police Service officer. He served in the Special Protection Group for about a decade and was in the security detail of a former prime minister. RR also had an outstanding stint in the Central Bureau of Investigation for around 10 years.

Many of the reforms he introduced as director general of prisons in Kerala helped not only the inmates to reform themselves but also helped the society to benefit from public utility activities of the jails. Due to his efforts, Kerala prisons now double up as agriculture and production centres. He also brought in reforms through which inmates are financially motivated to redeem themselves and make them ready to be back in the society as productive citizens. It was largely due to his efforts, an inmate in Kerala can earn up to ₹12,000 per month working in a prison. Apart from this, his proactive initiative to release prisoners on bails and paroles to decongest the otherwise packed buildings is noteworthy, especially during the times of social distancing during the pandemic. Masks and sanitizers that were mass-produced in Kerala jails and sold at affordable prices came handy to commoners to protect themselves from coronavirus infection. It didn’t just stop at that. Service orientation inculcated in inmates inspired them to reach out to the needy by cooking and supplying food to thousands of people accommodated in isolation centres.

RR also has a range of hobbies and interests. Although he isn’t exactly a Rafi or a Balu, he croons spiritedly, very often in Malayalam – the language of his cadre state. In fact, he wrote articles and books in the language. Among his workout pursuits, he likes riding bicycle outdoors and his recent pedalling photos on social media drove me to relate him to Joe Biden’s cycling adventures in Delaware. RR promotes vociferously the artistic grandeur of the talented, be it the Thrissur Pooram elephant decorations or Swapna Augustine’s acrylic paintings.

What else is more valuable than forging unity and fraternity among friends and batchmates and in the society at large? I have always felt that it is this “service” that RR has prioritized over other important aspects of life. I thought that Charles Darwin was half-right when he talked of “struggle for existence” and “survival of the fittest”. Adjusting to time, space, and situations requires human species to have further emphasis on the critical components of existential matters. Therefore, friends like RR are helping us to know the way for complete philosophy with the help of live instances of “struggle for coexistence” and “survival of the friendliest”, which they preach and practice.

Promoting the feeling of oneness and camaraderie is the key to unify the entire humanity. RR has already hinted that he would be more active than ever following his retirement after 36 years of glorious service to the nation as an IPS officer. And I have no doubt that the new beginning for him has arrived as he takes stance for his second innings in life.

The author, B Maria Kumar, is a retired IPS officer. He served as the director general of Madhya Pradesh Police and retired in 2018.

Disclaimer: All views expressed in this article are the author’s own and may not reflect the views of India Sentinels.