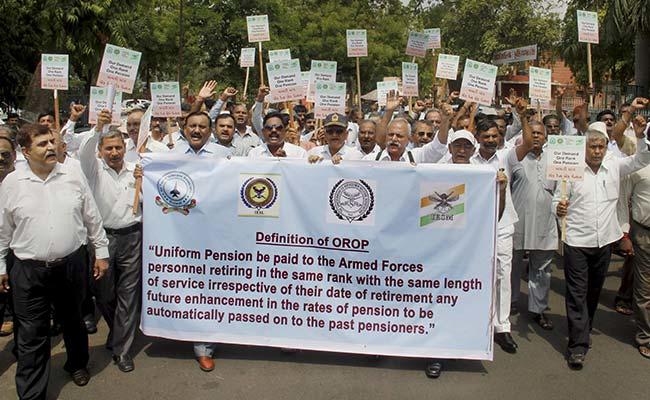 File photo of veterans protesting against the non-implementation of OROP, as it was originally defined.

“One rank, one pension” or OROP has been a long and outstanding demand of the veterans of India’s three services ­– Army, Air Force, and Navy. Prior to the Third Central Pay Commission (3CPC), there was no OROP. Instead, there was “Standard Pay Rate of Pension” (SRP). It existed up to and including 3CPC. It was mooted in 1949 -50 by Armed Forces Pension Revision Committee (AFPRC) as post-war pension code. The 3CPC did not abolish it. It increased the SRP amount to benefit soldiers. This is just to clarify as politicians are singing OROP as their brainchild of today.

The aim of writing this is to not go into the statistics part of OROP but to highlight why it is important and necessary for the soldiers. Why the armed forces asked for OROP? It is not only about money – as the narrative is being spread by the powers that be. In fact, it is related to the pride of soldiers and their families who too deserve a decent and comfortable life while serving and post retirement. The amount that a veteran soldier gets as pension today is barely sufficient to make his two ends meet given the massive inflation and price rise of almost everything.

It is no secret that the soldiers retire at any early age as compared to the civilians. Personnel below officer rank (PBOR) retire as early as 35 years of age due to service conditions, and many a time due to domestic compulsions. However, they have to continue support large families including parents, wife, and children as most are from rural background where the tradition of joint family is still prevalent. Pension as of today is hardly sufficient to meet the requirements of education, healthcare, and food – the basic requirement for a decent and respectful life.

Before the 2014 general election, Narendra Modi, the prime ministerial candidate from the Bharatiya Janata Party went on a campaign spree promising the moon to the people and OROP to the soldiers. He built a solid narrative against the-then incumbent government and promised the implementation of Koshyari Committee recommendations on OROP to the armed forces in letter and spirit. A huge rally for the veterans was organized at Rewari, Haryana where in the presence of the just-retired chief of the Army staff, General VK Singh, he again reiterated his promise.

The BJP won’t the election with absolute majority and Modi became the prime minister. There was hope all around in the services, especially among the veterans, that OROP would be implemented as Modi had promised during his election campaign. However, what really happened on ground came as a rude shock for the hopefuls. The Modi-led government amended the definition of OROP – as given by Koshyari Committee – to suit its agenda. What was implemented was not OROP but one time enhancement in pension. The veterans did not accept it and urged the government to stick to its pre-election promise. When the government did not heed to their repeated requests, they moved the Supreme Court.

The government then announced setting up of a one-man judicial committee (OMJC) to look into the issue. The findings and recommendations were submitted but are gathering dust somewhere perhaps because it did not suit the government plan.

After the BJP’s second win in 2019 general election, the defence minister again set up a one-man committee to review the demands of the veterans. The committee was required to submit its report in one month. This too, is lying in some cupboard or is under the carpet.

Right from the beginning, OROP was opposed by Modi’s first finance minister, Arun Jaitley, for obvious reasons. The inaction of this government was a clear indication that it was in no mood to implement the actual OROP. All hopes were on the Supreme Court, but it too delivered its verdict favouring the government. Apparently, it accepted the government submission that whatever was stated in Parliament, was not necessarily the Gospel truth. So much, for the sanctity of Parliament.

This was the ultimate betrayal of the soldiers who only asked for their genuine right. But as expected, bureaucracy and the politicians played dirty.

One wonders what made the government go back on its promise. The obvious conclusions are:

(a)      Bureaucracy played dirty, and politicians backed it.
(b)      Senior officers in the services who never supported the veterans.
(c)      Absence of a strong impartial media.
(d)      The prime minister showed absolute lack of intent. The attitude of the government is seen as it also failed to revise pension every five years.

The foregoing can only be termed as unfortunate. Soldiers never asked for something excessive. They too have a right to live with dignity while in service and after retirement.

It is pertinent to mention the following points here:

(a)      India is the only country where soldiers pay for their insurance.
(b)      The people in judiciary get OROP, non-functional financial upgradation (NFFU), etc, and only soldiers have been denied this.
(c)      The medical facilities while in service are just about satisfactory but pathetic for veterans.

One wonders when bureaucrats and politicians and their families have access to world-class healthcare facilities here and abroad, why soldiers are overlooked?

One can go on and on narrating the difficulties faced by the men and women in uniform. The soldiers and their families too have a right to live with dignity.