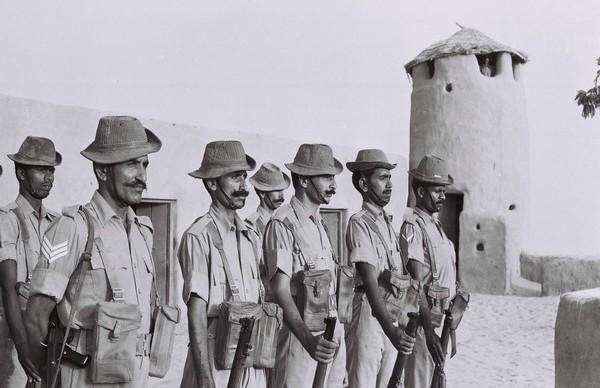 An old photo of BSF troops at a border outpost somewhere in the western theatre.

VV Giri, the-then President of India appreciated the role of the Border Security Force during the 1971 Liberation War of Bangladesh with following words:

The role of the BSF in 1971 War won for it the unstinted admiration of the entire Nation. The BSF forged great camaraderie with the Indian Army, with whom they fought shoulder to shoulder.

However, the contributions of BSF, still in its infancy in 1971, did not find any recognition during the celebrations of the 49th anniversary of resounding victory of India over Pakistan in the Liberation War of Bangladesh.

That BSF soldiers were awarded several gallantry medals including one Mahavir Chakra, 11 Vir Chakras, besides 44 Mentions in Despatches and 41 Police Medals for Gallantry is a hardly known fact.

The BSF got involved in the Bangladesh Liberation War as soon as the genocide by Pakistanis started in what was then East Pakistan. The BSF not only lived up to its mandated wartime role of being the “first line of defence” but also proved its mettle in offensive operations.

BSF resources were deployed to the maximum at the border and they repulsed several well-coordinated enemy attacks on the border outposts (BOPs) in the eastern theatre. Before the outbreak of war, on December 3, 1971, BSF trained and coordinated operations by the Bengali guerrillas of the Mukti Bahini. BSF commandos in conjunction with them disrupted lines of communications of Pakistani army and carried out stand-off attacks on their positions, degrading their morale and war-fighting capabilities.

Aggressive shelling of West Bengal’s Hili border areas by the BSF’s 77 Battalion in April 1971 forced the Pakistanis to show flag and request for truce. Later in Novevember 1971, the unit launched an attack and captured the enemy BOP at Khanpur. Slogans of “Long live India-Bangladesh friendship” resonated in the air when troops of the battalion entered Rajshahi in East Pakistan, forcing Pakistanis to retreat. Unit histories of 103 and 82 battalions too are replete with similar stories of valour while operating in border regions of West Bengal’s Cooch Behar and Assam’s Panbari respectively.

The operational responsibility of north Bengal fell almost exclusively upon the BSF after Army formations moved to south for operations. The BSF acquitted itself very well in this sector. A specially created group of BSF troops succeeded in pushing Pakistanis several kilometres back to capture Mirzaganj Haat and Domar in Rangpur division, East Pakistan. They later captured Nilphamari and Kishoreganj also.

Deputy Commandant Indrajeet Singh Uppal of the BSF’s 78 Battalion made the supreme sacrifice in the Battle of Raiganj and was posthumously awarded Vir Chakra. Lieutenant Colonel Noel Gregory O’Connor, who was commanding the 70 Battalion, was awarded Vir Chakra. Four other personnel of his battalion were also awarded Sena Medals for the bravery they displayed in capture of Bantara and Mohanpur BOPs after a furious battle on November 5, 1971.

Assistant Commandant Baljit Singh Tyagi of 83 Battalion BSF along with only 11 personnel fought off two fierce attacks by the Pakistanis on Killapara in West Garo Hills, in May 1971. Nine of the troops fell fighting valiantly, while two were taken POWs. Their valour denied the enemy the control over strategic Dalu-Tura road. All of them including Tyagi were awarded gallantry medals. A memorial was unveiled by Major General Aziz Ahmed, the-then director general of the Bangladesh Border Guards, in May 2013 at Killapara.

Similar acts of bravery were displayed by troops of 84, 85, 86, 87, 92, 93 and 104 battalions in Meghalaya, Silchar (south Assam) and Tripura sectors against the regular Pakistani army.

The BSF thus played a very important role in the 1971 Liberation War of Bangladesh right from the beginning and fought shoulder to shoulder with the Indian Army. Twenty-three BSF units were deployed under the Army’s operational control and they displayed their metal in both defensive and offensive actions against enemy positions independently, as well as in conjunction with the Army.

Stellar performance of the young force was not restricted to the eastern theatre only. The BSF made significant contribution in western theatre too.  Intricate knowledge of terrain by BSF was put to good use for reconnaissance by the Army on the western theatre. Extensive patrolling and proper tasking of its sources enabled collection of useful information about enemy built up and intentions. One such information led to apprehension of a Pakistani spy in Ganganagar, which led to the revelation of enemy plans of pre-emptive air strikes.

The 1, 2 and 3 battalions of the BSF captured a large area opposite Gujarat facing stiff resistance by Pakistan army regulars. The newly raised Post Group Artillery (PGA) of BSF not only gave fire support to the BSF but also to the Army units operating in that area.

In the Rajasthan sector, troops of the BSF’s 14 Battalion along with the Army put up a heroic defence and fought valiantly to thwart a much larger enemy force, which included armour, from capturing Longewala and Ghotaru posts. Exceptional bravery of the troops of 14 Battalion in the famous battle of “Tanot Longewala” and “Shahgarh Bulge” earned them the sobriquet of “Sentinels of The Thar”. The troops of 15 and 11 battalions also displayed exceptional bravery and earned 3 Sena Medals and 10 Police Medals for Gallantry.

BSF also succeeded in capturing 23 enemy BOPs in this sector and caused heavy causalities to them through offensive action.

In Punjab too, BSF troops displayed indomitable courage to hold on to their position even in face of overwhelming superiority of enemy. Three personnel of the BSF’s 27 Battalion were awarded Vir Chakra for conspicuous bravery in repulsing four attacks on consecutive days by enemy on Rania post. The battalion also repulsed an enemy raid on BOP Mulakot on December 4, 1971. However, the enemy succeeded in the second raid and captured it. The BSF unit then recaptured it in conjunction with Army troops. Three BSF jawans injured in the operation were awarded gallantry medals for their bravery.

In the Jammu & Kashmir sector, the BSF was at the receiving end of enemy fire assault in several areas before being allotted tasks in depth area upon arrival of Army.

Eighteen soldiers of the BSF’s 57 Battalion deployed in RS Pura have remained untraced till date. The unit, in conjunction with the Indian Army’s 5 Sikh, repulsed several attacks on the Moel BOP. Personnel of 54 Battalion, as part of raid on the enemy post at Saleem, played pivotal role in its success.

In Rajouri and Bandipura, the BSF was involved in defensive battles alongside the Army.

The BSF’s 49 Battalion held an independent sector in Mandi Mandir and captured two Pakistan army’s Special Service Group commandos. The BSF’s 44 Battalion assisted the Army in capturing the Pakistani posts at Druchian, 495 and Tarkundi. The 50 Battalion along with the Army operated to clear Thanpir of infiltrators and recovered large quantity of weapons and explosives. Assistant Commandant Nafe Sing Dalal of 40 Battalion BSF received the Vir Chakra posthumously for his conspicuous bravery in defending the Delta Contour post.

The BSF operated independently in the Bandipur sector with four battalions and three PGAs. The 61 Battalion carried out a brilliant rear-guard action on November 22, 1971 to extricate a BSF platoon patrolling the area around the Ring Contour post, causing heavy causalities to enemy and destroying several of their bunkers. In another daring action a patrol led by Assistant Commandant YS Bisht infiltrated behind enemy lines to destroy an enemy picket through fire assault. The unit also captured about four kilometres of enemy territory in Gurez and established pickets there. Assistant Commandant WS Elley led an offensive to capture the post.

It can therefore be emphatically stated that the BSF, although in its infancy, performed exceedingly well in the 1971 war. The important role played by the BSF in many other fields like collection and dissemination of accurate information, assistance to the Army in familiarization of area, etc, were of vital importance for operations.

As the first line of our defence, the Border Security Force had to bear the immediate brunt of the enemy onslaught. The manner in which they faced enemy fire and the support they gave to the Army has played a crucial role in our ultimate success.

Our thoughts and prayers are with the families of the men and the officers who have sacrificed their lives in defence of India and her values.

I should like to express the gratitude of the government and the people of India to you and to your officers and men.