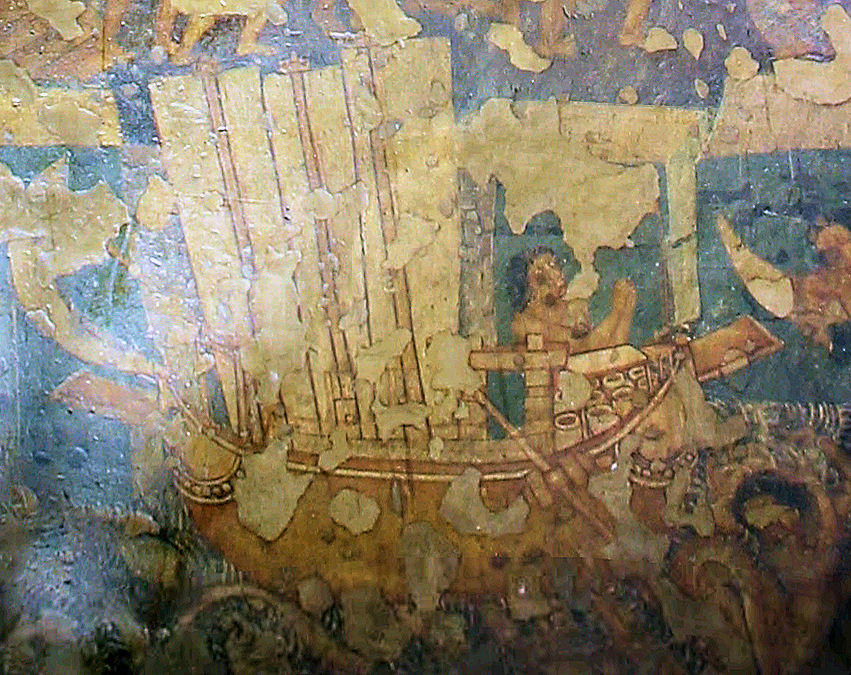 A 5th-century painting of a three-mast sailship in the Ajanta Caves complex. (Photo of this public domain art taken by Sweekar Bhushan Pamulaparthy)

India is known for its diversity in art and architecture, distinctive edifices, perennial culture, and myriad customs practiced by its billion citizens. India, as a peninsula, has long been identified with its maritime character. From the creation of the first dock to the path of indigenously building advanced military vessels, India’s maritime tradition dates to antiquity. While the tangible maritime heritage including forts, lighthouses and other coastal features forms an integral part of the protection process, the intangible heritage happens to be left inconspicuous. This legacy is on the verge of extinction with each passing year.  On April 18, we observed the World Heritage Day. Today, let us discuss the intangible maritime heritage that forms an essential part of India’s cultural heritage.

In 2003, the United Nations Educational Scientific and Cultural Organization (Unesco) adopted the “Convention for the Safeguarding of the Intangible Cultural Heritage”. This convention defines intangible cultural heritage as: “the practices, representations, expressions, knowledge, skills as well as the instruments, objects, artefacts and cultural spaces associated therewith that communities, groups or individuals recognize as part of their cultural heritage.” Such intangible heritage manifests itself in oral traditions such as stories, events and myths, dramatic performances and performing arts, like coastal songs, poetry, or traditional dances. It also includes social practices and rituals, such as chants, prayers, indigenous practices or daily routine, festivals, languages, knowledge, and practices regarding the nature of the universe and traditional craftsmanship.

The intangible heritage, due to its nature of existence, is not technically documented. Since they are based on personal experiences, these are first-hand accounts of events, skills or development of the traditions and conservation of this form of heritage is crucial. Within the maritime domain, intangible heritage includes knowledge of indigenously constructing vessels, rituals before and after the vessel sails, the knowledge of when to sail and how to sail, experiences while at sea, folk songs, drama, and dance rendition based on their experiences at sea and costumes, etc.

Places like Mandvi in Gujarat and Beypore in Kerala still practice the traditional craft of constructing a timber oceanic vessel by hand. The techniques of bending wood in the dedicated form, indigenous methods of waterproofing using fish oil and cotton, carving of wooden joints and ways of manually undocking the vessel post-construction after a dedicated ritual according to the tides and other factors depict the richness in craftsmanship and nautical wisdom in the maritime domain. Very few sailors in the country who have mastered the art of navigation using traditional techniques such as celestial studies, tides, demarcation of coastal features, etc, survive today.

Many Indian sailors and naval officers have participated in countless wars and memorable events during the 20th century. These sailors and officers are now veterans of considerable age. The stories of war, their experiences and the thought behind every action have never been recorded. The legacy that they experienced or have known is priceless. Many coastal communities still prepare traditional cuisine as part of their daily routine. Boita Bandana, a festival celebrated in Orissa at the onset of Kartik Poornima commemorates the historic voyage of Kalingans sailors to distinct nations in Southeast Asia via the Bay of Bengal. Bhatiali music, which is popular in Bangladesh and parts of West Bengal, is the music of fishermen and is inspired by their daily existence on the water. It includes their hardships, victories, love, natural beauties, and day-to-day activities along the rivers.

Today, with time, this form of heritage is under threat of extinction. With modern replacements for indigenous skillsets, the traditions are losing their importance. The introduction of metals and machinery has significantly reduced the demand for traditional craft. People prefer fast machine-made perfect products rather than intricate traditional handicrafts. Craftsmen complain of lack of recognition and government support in the field due to which many have shifted their profession. The elders are reluctant to share the knowledge with anyone but the family members due to which the knowledge is passed on with limited outreach. The value of the naval veterans and traditional mariners is unrecognized due to which there is no initiation of the documentation process. Many institutions lack the skills of recording oral history, and the knowledge is lost in transit. The traditional festivals, cuisines, songs, dances, and drama renditions are not encouraged by the younger generation due to the western fad of celebrating international festivals.

The intangible heritage within the maritime domain is a crucial component that gives value to its tangible heritage. While awareness is slowly being instigated, efforts need to be extended at a larger scale. The Indian government has a dedicated section under the culture ministry to nurture it. Several schemes and initiatives are in progress. India focuses on the dissemination of shared knowledge systems, technologies, cultures, and ideas over maritime channels by the culture ministry’s “Project Mausam”. In 2015, India launched the “Sagarmala” initiative that aims at transforming inland waterways through port-led development that aims to achieve a holistic advancement of coastal communities. The project has already resulted in numerous job opportunities and made a considerable economic impact while allowing for an intercultural interchange of ideas and skill sets with neighbouring and nearby countries. It has also boosted India’s global standing as a maritime power by emphasizing the cultural component of the maritime realm.

Nevertheless, students and historians should have a keen eye and take initiatives towards the conservation of its intangible maritime heritage. If urgency is not shown, the knowledge will be lost forever.

The author is a senior research fellow at Mumbai’s Maritime History Society.