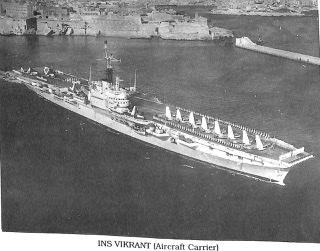 The only thing that we learn from history is that we learn nothing from history – Hegel. If Georg Hegel were to turn in his grave each time an incident across the world proved the accuracy of his statement, by now he may perhaps have rotated more times than the earth rotates around its axis in a year!  And yet, often there have been discourses on wide ranging topics that are contrary to what history wants to learn from it.One such topic is to question the veracity of aircraft carriers in the Indian context.

On March 4, 1961, Indian maritime history changed forever when the first aircraft carrier – INS Vikrant – was commissioned by Smt Vijayalakshmi Pandit at Belfast, United Kingdom.  It was the beginning of record books being filled up fast and quick – just like the jets that were launched from the mighty flat-top’s deck.  It was also the first ever carrier for an Asian country and remained that way for a long time. Since then, at any given instance, India has always had the cover of at least one aircraft carrier; occasionally two. What role did these leviathans of the seas perform to date and how did they insure our peace?

The first major action for India after the arrival of its maiden carrier, was Operation Vijay in December 1961, towards liberation of Goa from the Portuguese.  The carrier did not participate simply because it was like using a mace against a small creature – an overkill.  Yet, the mere knowledge of the carrier’s presence approximately 100 nm off Goa may have had some psychological impact on the Portuguese who could not send in naval reinforcements and instead let the sloop NRP Afonso de Albuquerque bear the brunt. The possibility of reinforcements was also negated by Egypt’s refusal to allow Portuguese naval ships pass through the Suez. 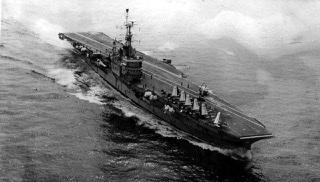 A year later, despite a near decade old Panchsheel agreement, the India-China land border witnessed action.  Naval participation in the 1962 war with China was conspicuous by its absence.  A decision which perhaps was the result of India’s relative inexperience with carrier operations along with its possible desire to limit further escalation. It was also a time China did not have a navy to boast of.  Today it boasts of two and three more under construction.

The 1965 war witnessed subdued naval participation on both sides.  The Indian government of the day was reluctant to use sea power and preferred restricting the scope of the war to land borders instead of it spilling over the sea.  Vikrant at the time was undergoing refit at the Naval Dockyard at then Bombay (present day Mumbai). While its air squadrons were operating from ashore, they were under the operational control of the Indian Air Force.  The Pakistan Navy made the most of the situation.  After a symbolic bombardment off Dwarka in Gujarat which was in the bigger scheme of things, considered an irritant at best with nil effect on the war itself, the media blitz that was followed up by Pakistan resulted in the day being commemorated as its Navy Day.

The 1971 war saw the full scale of naval operations.  If the missile boats bombarded Karachi, Vikrant’s Sea Hawks and Alizés coupled with Army and Air Force action secured Dacca and ensured the honourable citizens of Bangladesh were freed of Pakistani treachery.  Indeed, the Military’s Trident (Army, Navy and Air Force) had struck hard and struck deep.  Naval Air Power in the Indian context had truly arrived. If India had a second carrier which was deployed on the Western theatre while one was bombarding East Pakistan, history books would have been more voluminous, despite covering a shorter period. 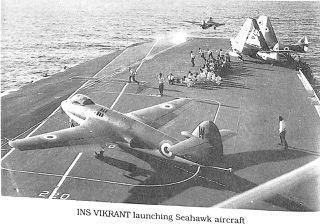 Little wonder then, that in 1999 Viraat was undergoing refit, Kargil unfolded.  Too much of a coincidence?  Yet, unbeknownst to many, it was Indian Navy which proved to be the nail in the coffin, ending the conflict.  If it were not for the Indian Navy’s bold deployment at the gates of Karachi, Pakistan may have had the courage to drag the conflict on for a few more months.

Perhaps the horrors of 1971 naval action were still fresh in their memories.  But if Viraat was in refit and the conflict still ended with naval posturing, was the carrier no longer relevant?  Quite the contrary.  The impact of a carrier at sea that could launch fighters and change the course of war is a given.  While it was public knowledge that Viraat was in refit, the services of Indian newspapers sought to publish photographs of the Sea Harriers’ (carrier borne aircraft that operated from Viraat) ability to operate from merchant ships.  The projection of a makeshift carrier in the media, to achieve psychological impact itself spoke volumes of the necessity of a carrier.  Effectively the carrier made its presence even when it was out for maintenance.  That was then though.  Such means may not find takers today.  But what it did, was to bring in the realisation that the requisite number of ‘operational’ carriers in India’s arsenal ready for deployment at the will of the government is a necessity and no longer a luxury that carriers are occasionally made out to be.

As India inches closer to her 75th anniversary of independence, there is one clear lesson from history.  During all major wars / conflicts that India has faced, when the aircraft carrier was in play, the outcome was clearly the Indian way. In the absence of the carrier, it was the adversary who believed he was wiser.  It is time we allow Georg Wilhelm Friedrich Hegel to rest in his grave with the assurance that India is a good student of history and knows that the way to insure its peace in future, is through aircraft carriers – in adequate numbers.

The author is a Delhi-based independent journalist.

Disclaimer: The views expressed are solely the author's and do not reflect the opinions and beliefs of the website or its affiliates.